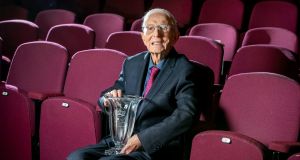 Florence McGillicuddy, a great-great grandfather from Rathfarnham in Dublin, won the overall prize at the Age Action Silver Surfer Awards, which took place at the Helix in DCU. Photograph: Marc O’Sullivan.

A 95-year-old blogger has been honoured for his contributon to community life through the use of technology.

Florence McGillicuddy, a great-great grandfather from Rathfarnham in Dublin, won the overall prize at the Age Action Silver Surfer Awards, which took place at the Helix in DCU.

Children from the school attended the ceremony to celebrate their friend and unofficial history teacher receiving the honour.

Alex Rice (9), a pupil at the school, said he loved hearing Mr McGillicuddy’s stories,particularly one about a plane crashing in Terenure in 1934.

“He is really interesting because he tells us all about our local history,” said Alex. “He has been living so much longer than us and has so much more experience.”

Saoirse Rooney, a teacher at the school, added: “Florence doesn’t need any IT support from us...He tells the kids the most amazing stories and is always encouraging them to ask their own grandparents about things.”

There were three winners from Co Cork at the ceremony. The “Three Paddys” - Paddy Buckley, Patrick McAuliffe and Paddy Tobin - took home first prize in the ‘Hobbies on the Net’ category.

The trio shoot and edit videos about local history and culture and also call to older people to capture their memories in films that can be passed down to the generations.

Rosie Smith-Dunne (91), from Dún Laoghaire, was nominated in the ‘Golden IT’ category, which recognises technology users over the age of 85.

The great-grandmother has three phones, an iPad and a laptop which she uses to keep in contact with her family around the world.

“It’s absolutely brilliant to be able to stay in touch with my children and grandchildren in America and Canada. When I was younger we had to go down to the local pub to make a phone call,” she said.

Ms Smith-Dunne joked that she would “die without” her Climote app, which lets her switch on the heating before she gets out of bed in the morning.

More than half of people aged between 65 and 75 have never used the internet, according to Age Action Ireland, which has trained more than 35,000 people in an effort to make them embrace technology.

“Loneliness is a huge issue among older people. Technology is a great way for people to stay connected and feel included,” the charity’s chief executive Patrick Connolly said.

He welcomed the planned national broadband project, which aims to deliver high-speed internet to some 540,000 properties across the State, saying “the idea we might leave such a significant part of the population without internet is not okay”.