How a team of Irish astronomers eclipsed their more famous rivals

A landmark experiment in 1919 set out to prove Einstein’s theory of relativity by observing a total eclipse. Irishmen Andrew Crommelin and Howard Grubb played central roles 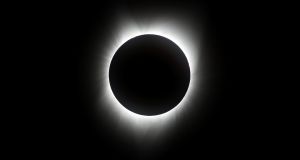 During the eclipse, Crommelin operated the telescope loaned by the Royal Irish Academy, and it was his photographs which actually confirmed Einstein’s theory. Photograph: Justin Sullivan/Getty Images

Most Irish people today are aware that astronomy thrived in Ireland during the 19th century, thanks to the enthusiasm of a number of prominent wealthy amateurs, such as the famous Earl of Rosse.

Since most of these astronomers were Anglo-Irish in background, the international profile of Irish astronomy declined sharply after independence. With this aura of a lost world of big houses and bigger telescopes goes an impression that the golden age of Irish astronomy left little imprint on the world of astronomy at large.

It is not widely known that Irish astronomers played an essential role in the most famous astronomical experiment of the 20th century, which celebrates its centenary this year. That 1919 experiment involved two expeditions organised by leading English observatories which confirmed Einstein’s theory of General Relativity and made him a household name around the world almost overnight.

Although the expeditions were launched from England, most of their instrumentation was manufactured in Ireland by an Irish firm. The most important data was taken by a telescope on loan to the expeditions from an Irish learned society, and it was operated in Brazil by an Irish astronomer. Thus Irish astronomy played a critical role in one of most famous scientific experiments ever conducted.

In the late 19th and early 20th centuries, Dublin was home to one of the world’s leading telescope manufacturers, the firm of Howard Grubb, originally founded by his father, Thomas Grubb, a Waterford-born Quaker. The project which helped Grubb make his name internationally was the first all-sky photographic survey, the Carte du Ciel project. Grubb manufactured seven “Astrographic” lenses for this project, for observatories around the world.

He also made one with a very similar design for the Crawford Observatory in Cork, though it never participated in the Carte du Ciel. Because of their unique design intended for astrometry (the measurement of stellar positions) two of Grubb’s Astrographic lenses were used by the expeditions of 1919.

Since eclipses played an important role in solar astronomy in the late 19th century, Grubb proposed an Irish expedition to observe the eclipse of 1900, visible in totality from parts of Spain and Portugal. The expedition was sponsored by the Royal Irish Academy and the Royal Dublin Society, with the participation of Dunsink Observatory.

It was typical at this time for learned societies to provide funding for such expeditions, to purchase required equipment. For this expedition the RIA and the RDS each purchased a coelostat mirror from Grubb, who also provided a four-inch lens. Later the RIA lent the lens and its coelostat mirror to English Astronomer Fr Aloysius Cortie, a Jesuit priest, who used it at several subsequent eclipses.

Fr Cortie played an important role in planning for the eclipse of 1919, for which the English astronomer royal Sir Frank Watson Dyson proposed a novel observing programme. In 1915 Albert Einstein had published his general theory of relativity and one of its three main predictions was that light would be deflected from a straight path by the gravitational field of the Sun. Such a deflection would slightly shift the positions of stars next to the Sun, but such stars are only visible during a total solar eclipse.

Dyson noted that the eclipse of 1919, visible in totality along a track across South America and Africa, would be especially suitable for testing Einstein’s theory, because the Sun would then be amongst the stars of the Hyades star cluster, the closest stellar cluster to the Earth.

Unusually, there would be several bright stars close to the Sun during the eclipse. Although the planning of the expeditions was handicapped by the first World War, so auspicious was the eclipse star field for the testing of Einstein’s theory that Dyson and his main collaborator, Arthur Stanley Eddington of the Cambridge University Observatory, were determined to send observers if at all possible.

Crommelin was an expert on the orbits of comets, best known for his accurate prediction of the time of comet Halley’s return in 1910

When the war ended suddenly in late 1918 the eclipse teams were able to depart in March 1919, and Fr Cortie had arranged for the RIA’s equipment to accompany the expedition bound for Brazil. At the last minute he was denied permission by his order to go himself. Dyson chose as his replacement an Irish astronomer from his own staff at the Royal Observatory in Greenwich. Andrew Crommelin was an expert on the orbits of comets, best known for his accurate prediction of the time of comet Halley’s return in 1910.

He was available because he turned 51 in 1916, thus making him ineligible for conscription. Shortage of manpower was a major factor in planning for the expeditions of 1919. Both of Eddington’s assistants at the Cambridge Observatory had been killed in action during the war. Eddington himself, as a Quaker, had resisted conscription and might have been jailed but for Dyson’s intervention on his behalf.

Crommelin was born in Cushendun, in the glens of Antrim in 1865. His family brought the linen industry to Ulster in the early 18th century. He observed the eclipse from Sobral, a small city in northeastern Brazil. The day of the eclipse, May 29th, was overcast but luckily a hole in the clouds appeared just before totality.

During the eclipse, Crommelin operated the telescope loaned by the RIA. Since the other observers were foiled by equipment malfunctions and weather, it was the photographs taken by Crommelin which actually confirmed Einstein’s theory and overthrew Newton.

Such is the significance of these results that Crommelin’s accidental involvement in the expedition of 1919 dwarfs his other scientific contributions. Einstein and Eddington’s fame has obscured the important contributions made by men like Dyson, Grubb and Crommelin. In this centenary year we should honour the Irish contribution to this famous scientific achievement.

Coronavirus: No new deaths reported in the State as number of cases rises by 32

1 Gardaí found naked man on a cross being whipped in Dublin club, court told
2 Coronavirus: No new deaths reported in the State as number of cases rises by 32
3 Two in custody after Ryanair flight to Dublin forced to divert
4 Taoiseach says Garda document on Cowen case ‘not quite as portrayed’
5 Many people identified as close contacts refusing to come forward for Covid-19 testing
Real news has value SUBSCRIBE

Coronavirus: No new deaths reported in the State as number of cases rises by 32 17:39
Chilean student kept in solitary confinement here is freed 17:16
Murder accused claims he is victim of Garda campaign 17:00
Taoiseach says Garda document on Cowen case ‘not quite as portrayed’ 16:03
Docklands swimming pool worth €15m would cost council ‘zero’ 15:14