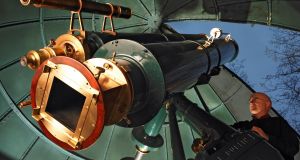 Prof Paul Callanan pictured with the equatorial telescope in the Crawford Observatory, UCC, which was manufactured by Howard Grubb. It tracks the motion of the stars using clockwork - just the same as Grubb’s “coelostat” device, which was used during the eclipse of 1919. Photograph: Andrew Bradley

A total eclipse of the Sun 100 years ago today – on May 29th – provided the first evidence in favour of Einstein’s theory of general relativity.

It gave humanity a new understanding of the Universe and Ireland played a critical but largely forgotten role, according to UCC physicist Prof Paul Callanan.

A few years before 1919, Albert Einstein, had predicted how matter could bend the space around it, generating what we experience as gravity. “But Einstein’s predictions had to be tested, and it was decided to take pictures of the Sun during a solar eclipse, to see how the light from distant stars was affected as it passed as close as possible to the limb of the Sun,” he explained.

So, two expeditions set off from England to obtain images of the Sun during the 1919 solar eclipse; one to an island off the coast of Africa, and the other to a town called Sobral in Brazil.

It turned out that the most accurate measurements were obtained in Sobral using Irish-made instruments, one of which was made by Howard Grubb (a foremost engineer of his time in the field of telescopes and photographic lenses). That expedition was led by astronomer Andrew Crommelin from Cushendun in Co Antrim.

When the results were finally announced, they made the front page of the New York Times: “Lights all Askew in the Heavens, Einstein Theory Triumphs”– and it made Einstein a household name. “It was one of the defining moments in our understanding of how gravity really works,” Prof Callanan said.

Einstein would later remark the “expedition of 1919 is ultimately to blame for this whole misery, by which the general masses seized possession of me.”

Rarely in any area of science have Irish-made instruments played such a key role in a fundamental discovery, Prof Callanan noted. “We should always be proud of that. It’s great tribute to Grubb and Crommelin.”

Grubb in particular had a reputation as “a genius who meant business” – the view of astronomer, mathematician and polymath Simon Newcomb. From his works in Rathmines, he made hundreds of telescopes for leading observatories around the world, including instruments at the Crawford Observatory in UCC. The original device used for the key measurement still exists today in Dunsink Observatory.

Prof Callanan said he regards him as one of the earliest examples of “a high tech entrepreneur” in Ireland. Moreover, he believed there was insufficient appreciation of Ireland’s contribution of science and development going back hundreds of years. As a consequence, there was an onus on scientists and technologists today to maintain and build on that reputation.

Recently the world saw the first image of a Black Hole in space, he pointed out. “The press release concerning the Event Horizon Telescope image of the black hole last month also mentions this year being the 100th anniversary of a famous astronomical event that occurred in 1919. The image is very much part of the same journey – but in this case testing a theory for the space around an object a thousand million times more massive than our own Sun.”

The equipment used to test Einstein’s predictions has been shipped from Dublin Institute for Advanced Studies (DIAS) to Sobral to commemorate the 100th anniversary. The “Grubb Coelostat” and “Einstein Lens” are usually housed at the DIAS Dunsink Observatory, but will remain at Sobral Museum until August, when they will feature in an exhibition in Dublin to mark 100 years of astronomical development.

The coelostat reflects light from the sky onto a fixed telescope, and the lens is used to focus the light onto a photographic plate. Both were manufactured by Howard Grubb in Observatory Lane.

Prof Tom Ray of DIAS who is in Sobral said: “The effects observed by Crommelin in Brazil 100 years ago - using this Irish equipment - were key to Eddington proving Einstein’s general theory of relativity.

“On the morning of the eclipse, the other equipment did not work properly but the Grubb Coelostat and lens saved the day. Eddington himself said that the strongest evidence for Einstein being right came from the lens and coelostat from Ireland.”

Professor of Theoretical Physics at DIAS Denjoe O’Connor added: “The measurements from the 1919 eclipse established that the old Newtonian theory of gravity was inconsistent with the new observations while Einstein’s theory of general relativity explained the measurements.”

“With the advent of quantum theory 10 years later the challenge became and remains to make these two theories of nature into a consistent larger theory encompassing both, ie into a theory of quantum gravity. We at DIAS are actively engaged in this endeavour,” she said.