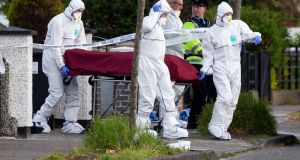 A body is removed from the scene of the shooting at Kilbarron Avenue, Coolock, Dublin. Photograph: Tom Honan

Dublin’s third gangland murder victim in eight days was shot dead when he called to the family home of a man killed last week to sympathise with that man’s next of kin.

Hamid Sanambar, originally from Iran, was gunned down on Kilbarron Avenue, Coolock, north Dublin, at about 3.30pm on Tuesday.

A gang of three masked men stepped from a vehicle and shot him dead outside the home of Sean Little, the 22-year-old man killed in a gun attack last Tuesday in north Co Dublin.

Mr Sanambar had visited the scene of Mr Little’s murder last week. The 42-year-old was regarded by the Garda as a violent gang member who had previously been paid to carry out murders on behalf of an organised crime gang in Dublin. Gardaí believe he was likely shot by his own associates – a drugs gang based in Finglas, north Dublin.

All four deceased men knew each other through their involvement in the drugs trade, and were linked to the Finglas-based gang or sourced drugs from it.

Gardaí suspect members of that Finglas gang were responsible for all the murders, although the exact links between the killings remain unclear.

Mr Sanambar’s killers shot him in the head before speeding away in a waiting vehicle. That car, a silver Toyota Avensis 04 D 71806, was later found on fire at Castletimon Gardens about 1.5km from the murder scene.

The killing comes at a time when gardaí are dealing with three violent feuds in Dublin and one in Drogheda, Co Louth.

“Communities are feeling abandoned by Government as their children go to school walking past murder scenes. This is not normal.”

While associated with Dublin-based criminals, and having worked closely with Mr Little of late, Mr Sanambar had previous addresses in several parts of Ireland, including Cork and more recently in Longford.

Having come to Ireland as an asylum seeker, he was granted permission to remain here, and had been living in the Republic since he was in his 30s.

“There is a sense in the area that things are getting completely out of control,” he said.

“The communities of Darndale and Coolock are reeling from this violence, the vast majority of families living in these areas are trying to live their lives, raise their families and just get on with life.

“They need to know that the powers that be have a strategy in place to address the rising violence, a plan in place to protect them.”