Proposals for co-living ‘welcomed by many’, Murphy says

May 26th, 2019: Minister for Housing Eoghan Murphy, has been confronted by housing protesters from People Before Profit at a count centre in the RDS, Dublin. Video: Jack Power 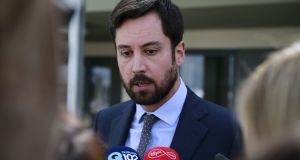 Proposals for co-living accommodation, which offers studio rooms with communal facilities such as kitchens, have been “welcomed by many sectors, from architects to others”, Minister for Housing Eoghan Murphy has said.

The Minister was criticised on Wednesday by several members of the Oireachtas Committee on Housing about the idea of co-living, which he last week described as an “exciting” choice for some workers.

Mr Murphy told the committee that the co-living blocks were aimed at young professionals, such as those moving to Ireland from abroad, and were one “small aspect” of the Government’s response to the housing crisis.

“Not everyone will want to move into a four-bed house with people they don’t know, they also might not want to live in a one-bed studio apartment,” he said, adding that the plans had been “welcomed by many sectors, from architects to others”.

Bartra Capital has proposed a a co-living complex in Dún Laoghaire with 208 “single occupancy bedspaces” and communal kitchens each shared by up to 42 residents. Housing charity Threshold described the developments as “21st-century bedsits with a glossy makeover”, while Green Party MEP Ciarán Cuffe said the scheme was “Dickensian” in nature. Bartra proposes that each en-suite bedroom will be 16.5sq m (177sq ft). The recommended minimum size for a disabled parking space is 17.2sq m.

Sinn Féin housing spokesman Eoin Ó Broin questioned the Minister on what protections would be put in place to prevent co-living properties from housing large numbers of vulnerable people on low incomes.

Mr Murphy said his officials would be “watching this very closely” to ensure the proposal did not result in “unintentional” types of housing down the line.

Solidarity TD Mick Barry said people would end up being “forced” into co-living apartment blocks, due to lack of alternatives.

The Department of Housing on Wednesday published figures which show that the number of homeless people across the State increased by 73 in April to 10,378.

The total includes 3,794 children, down by 27 on the figure for March, and 6,584 adults, an increase of 100 adults. There were 1,729 families, a decrease of four, accessing State-funded emergency accommodation.

There were 2,769 children living in emergency accommodation in Dublin at the end of April, down by 38 on the previous month, and 4,401 adults. In February, the number of homeless people went above 10,000 for the first time ever.

Mr Barry said the continued increase in homeless numbers was disappointing, and asked if Mr Murphy thought he “deserved to remain in office”.

“Personalising this to me is not going to help one family,” Mr Murphy said, before accusing the Solidarity TD of “playing to the gallery”.

There had been progress tackling the rising numbers, “but nowhere near enough,” the Minister said.

He said department officials were working to publish more detailed homeless figures, which would include statistics on how people were becoming homeless, and the amount of time they were spending in emergency accommodation.