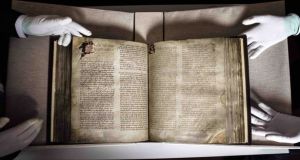 The Book of Lismore will eventually be displayed in a treasures gallery that UCC plans to develop in its Boole Library.

One of the most significant Irish manuscripts has been donated by the Duke of Devonshire to University College Cork which plans to put it on display in a special display gallery to be developed in the university’s library.

The Book of Lismore, which was created in the late 15th century, has been donated by the Trustees of the Chatsworth Settlement to UCC and will eventually be displayed in a treasures gallery that UCC plans to develop in its Boole Library

According to UCC Librarian John Fitzgerald, the Book of Lismore consists of 198 large vellum folios and contains important texts, many drawn from the Irish tradition and others that are translations of contemporary European works.

“This major medieval manuscript, created at Kilbrittain in west Cork, in a golden age of Irish literature, is rightly considered as one of the great books of Ireland and it reflects an Ireland that was deeply engaged with the contemporary European culture of the time,” he said.

Mr Fitzgerald explained that the manuscript was compiled for Fínghin Mac Carthaigh, Lord of Carbery, who lived at Kilbrittain Castle in west Cork between 1478 and 1505, and it subsequently became known as Leabhar Mhic Cárthaigh Riabhaigh.

“The book begins with religious-themed material, mainly lives of the Irish saints and apocryphal tales associated with them, before passing on to material in translation such as the History of the Lombards and the Conquests of Charlemagne.

“The Book also contains the only surviving translation in Irish of the travels of Marco Polo, which adds to the exotic, outward-looking ambience of the manuscript. Marco Polo is followed by a collection of native, secular texts dealing with the theme of Kingship.

“The Book concludes with the exploits of the popular mythological hero Fionn mac Cumhaill and the Fianna, as told in the lengthy tale known as Agallamh na Seanórach,” said Mr Fitzgerald, adding that UCC will welcome the book with a special virtual event at 11am on Wednesday on the UCC website.

According to the owners of the major medieval Irish manuscript, the Trustees of the Chatsworth Settlement who own Lismore Estate in Co Waterford, they made the decision to donate The Book of Lismore to UCC in recognition of academic and curatorial expertise at the university

Peregrine Andrew Morny Cavendish, the 12th Duke of Devonshire, who owns historic Lismore Castle on the banks of the Blackwater, said: “Ever since the Book of Lismore was loaned to University College Cork for an exhibition in 2011, we have been considering ways for it to return there permanently.

“My family and I are delighted this has been possible, and hope that it will benefit many generations of students, scholars and visitors to the university.”

He further explained that the Book of Lismore has been in the possession of the Cavendish Family and their ancestors since the 1640s and kept at Lismore Castle, Co Waterford, and in more recent times at Chatsworth House in Derbyshire.

UCC interim president, Prof John O’Halloran said that receiving the book was a very historic moment for UCC who will put in on display in the Treasures Gallery which will display items from the University collections, serving as an attractive destination for visitors to the region.

Mr Fitzgerald said the history of The Book begins in the late 15th century, when it was compiled for its noble patrons, Fínghin Mac Carthaigh Riabhach, and his wife, Caitilín, with the writing probably taking place at Kilbrittain Castle though it also links with the Franciscan house in nearby Timoleague.