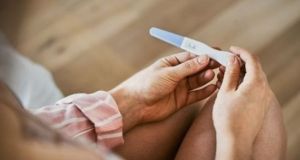 Just 101 Irish women travelled for abortions between January and June this year, compared with 215 during these months last year. Photograph: Getty

The number of women travelling to Britain for abortions more than halved in the first six months of this year, compared with the same period in 2019, amid warnings some women in crisis may find it impossible to travel as tighter Level 5 restrictions take hold.

Figures from the British Department of Health and Social Care, provided to The Irish Times under freedom of information legislation, show 101 Irish women travelled for abortions between January and June this year, compared with 215 during these months last year.

Although medical abortion on request is legal up to 12 weeks, thereafter an abortion must be performed in a hospital, and only in exceptional circumstances where continuing the pregnancy would put the woman’s life or health at serious risk or where the baby is likely to die within 28 days of birth due to a foetal abnormality.

Since enactment of the 2018 Abortion Regulation Act there have been reports of doctors reluctant to certify a foetal abnormality as fatal where there is any doubt, and others of women not finding out they are pregnant until almost 12 weeks or later, and falling outside the Act.

The Irish Family Planning Association (IFPA) says since March it has counselled women who have “encountered multiple barriers” to travelling, as have the London-based Abortion Support Network (ASN) which supports women in financial difficulties, and the British Pregnancy Advisory Service (Bpas), the largest abortion provider in the UK.

Barriers have included cancelled appointments at British clinics, cancelled flights, inability to find hotel accommodation and difficulties getting childcare while women are away.

Niall Behan, chief executive of the IFPA, said it had provided “specialist pregnancy counselling during the pandemic to a number of women who needed to access abortion care, but fell outside the criteria for access under Irish law”.

“Some individuals were able to travel to the UK, particularly in the early weeks before the requirement to isolate when travelling to other states. However, many encountered multiple barriers and were unable to travel.

“The new [Level5] restrictions will leave some women and girls in an impossible situation: excluded by law from accessing care in Ireland and precluded by the pandemic restrictions from availing of this essential service elsewhere,” he warned.

A spokeswoman said Bpas had seen a “significant decline in the numbers of women travelling from the Republic of Ireland. Women who have travelled have met significant difficulties, including flights being cancelled at short notice, sometimes when women were at the airport, leaving women stranded.

“Women have also been left without accommodation due to hotels closing without any warning. During the height of lockdown when all flights were suspended, women were forced to make the journey via ferry and trains.”

ASN director Mara Clarke said Covid had “added to the pile” of obstacles the women they support must overcome. “One woman arrived by ferry to Liverpool to find that the hotel we booked for her had given all their rooms to homeless and key workers,” she said, while some women with “fatal foetal indications are finding that many of the hospitals that used to provide care to them are closed to international patients”.