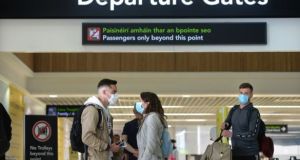 In September of this year, the IAA managed 38,172 flight movements, a decrease of 64.8 per cent on 2019, the committee was told. File photograph: Dara Mac Dónaill/The Irish Times

The Irish aviation industry will “not exist” without urgent political action, the Oireachtas transport committee has been told.

Quarantines must be replaced with a pre-travel testing regime to show “brave leadership”, the committee was told by the Irish Aviation Authority (IAA), which warned that “unless urgent action is taken at a political level, the Irish aviation industry which, as a nation, we have been so proud of over the past 30 years, will not exist.”

In his opening statement, the IAA head of corporate affairs Paul Brandon said that a solution must be found where passengers can travel throughout Europe with minimal restrictions. “Anything else is a band aid solution; not suitable for the scale of the crisis.”

The committee heard that the pandemic has “devastated” the aviation industry in Ireland, with levels of traffic dwindling to those not seen since the late 1980s. In September of this year, the IAA managed 38,172 flight movements, a decrease of 64.8 per cent on 2019, the committee was told. This level, Mr Brandon said, is “consistently below” the rest of the European air traffic network, and is “deeply worrying from an economic perspective”.

Given Ireland’s dependence on trade and tourism, “this disastrous situation cannot be allowed to continue as it impacts not just the whole aviation sector but also the social and economic wellbeing of the country,” he said.

“Like all aviation businesses, Covid-19 has hit us hard,” Mr Brandon said, pointing out that the regulators’ revenues are almost all linked to aircraft volumes in Irish airspace. Due to the “sudden and dramatic” decline in air traffic, the IAA is being kept afloat through cost containment measures and using up its financial reserves, he said.

The IAA also criticised “continual lockdowns” as “not sustainable from an economic point of view. As a country, we simply cannot afford it and we ultimately must move to a more sustainable strategy for business and society. Aviation and travel are no different”.

Mr Brandon said that living with the virus, for aviation, meant “an effective and harmonised system of travel across Europe, applied equally by all member states”, but warned that currently, the “aviation industry is not living with the virus, but rather (it) is dying”. Calling for the introduction of pre-departure testing as soon as possible, he said there is “minimal risk” of contracting the disease in airports or on board aircraft.

The IAA has welcomed the Government’s intention to adopt the EU-wide traffic light system agreed last week, but it warned the committee that while it is a step in the right direction, the system does not go far enough. It says that the continued use of quarantine measures for non-green list countries results in a “level of ambiguity, with the potential for continued blanket restrictions, will effectively render the approach useless”. The traffic light system falters when countries go orange or red, he said, calling for a “different strategy recognising the balance between virus risks and the mechanisms now available to manage those risks”.

Calling for advances to the testing system to replace quarantine, he said the current restrictions on air travel amount to a “dangerous course of self-destruction, particularly for an island nation like Ireland.”

“We can see that if an urgent step like this is not taken soon, many parts of the Irish aviation industry will not survive,” Mr Brandon said in his opening remarks.