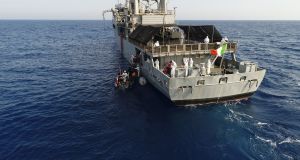 The Naval Service now has to frequently postpone seagoing missions due to its chronic manpower shortage and the effects of Covid-19.

Within the last year the service’s six operational ships have been regularly operating with close to the bare minimum of crew members, meaning if a small number of sailors become unavailable and no replacements can be found, the ships cannot go to sea.

In January, The Irish Times reported the LÉ Ciara was forced to delay a patrol mission for three days as it sought replacement crew members. According to senior Naval officers this has now become a regular occurrence.

In response to queries, a spokeswoman for the Defence Forces said “it is not uncommon for patrols to be delayed if an essential crew member is unable to sail due to force majeure”.

“Unfortunately, due to Covid-19, there has been a recent and expected rise” in the number of incidents where a replacement crew member cannot step in.

Naval sources also expressed doubt the Government’s new “loyalty scheme”, which offers a bonus of up to €10,000 over four  years for seagoing duties, would make a significant difference in the number of personnel leaving the Naval Service.

The scheme only applies to personnel with more than three years’ service, meaning there is little incentive for recently graduated personnel to stay on if they are offered employment in the private sector, they said.

One senior source said the Naval Service may have to tie up another ship in the near future if the retention crisis is not addressed. “It’s on a knife-edge,” they said.

Two ships, including the flagship LÉ Eithne, are currently tied up due to manpower shortages. Another, LÉ Róisín, is undergoing a mid-life refit while a fourth, LÉ Niamh is undergoing repairs following a fire aboard earlier this month.

This means there are currently only five ships available to sail. Between two and three ships are usually at sea at any one time, typically on maritime and fisheries patrols.

Sources warn the need for a fully staffed service is more important than ever with the growing possibility of a no-deal Brexit and its implications for fisheries protection.

It is understood Naval Service Flag Officer, Commodore Michael Malone, has received an order from the Government that the number of available ships must not, under any circumstances, drop any further.

However the retention crisis means he may have no choice but to place another ship into “operational reserve”, sources said.

The retention crisis is affecting all of the Defence Forces but particularly the Naval Service which is sorely lacking in skilled technicians.

Sources described recruits being headhunted by multinational corporations, particularly pharmaceutical manufacturers, immediately on their completion of technical courses paid for by the Defence Forces.

These private sector companies are offering upfront payments to recruits so they can buy their way out of their service commitments.

“These guys won’t be able to avail of the loyalty scheme for another one or two years so there’s no incentive for them stay,” one officer said. Another estimated that about 40 per cent of sailors on some ships would not be eligible for the scheme.

The preference of military management is for the patrol duty allowance (PDA) to be significantly increased for officers and enlisted personnel. This will dissuade young sailors from leaving and will attract more people to the service, they say.

The current PDA of €59 a day is significantly less than that paid to members of other seagoing agencies.

The churn rate of Naval Service personnel was near 15 per cent before the Covid-19 pandemic and currently stands at just over 10 per cent, double the rate generally accepted as best practice.

“Personnel in the Naval Service want to go to sea and want to have a future in the organisation. An increase in the PDA would have applied across all ranks and all personnel and would have incentivised sea-going,” one officer said.

“It’s obviously a step in the right direction,” said Senator Mark Wall, Labour’s spokesman on defence. “But at the end of the day it’s about getting the personnel to actually stay in the Navy and I think this won’t do much towards that.”