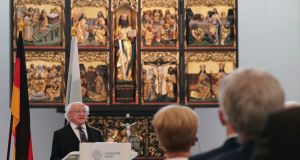 President Michael D Higgins at the University of Leipzig during a state visit to Germany: also attended a concert in Berlin’s Kreuzberg area. Photograph: Peter Endig

Aoife Ní Bhriain began her week in a massive copper beer cauldron in Bavaria: a recording session, she insists, not a drinking session.

On Thursday evening, the 28-year-old added another string to her bow: performing in Berlin alongside Lisa Hannigan and Dermot Kennedy for a special Other Voices concert to mark the state visit of President Michael D Higgins to Germany.

With her compelling performance, mixing Bach and Irish trad, the versatile violinist from Raheny in Dublin became an ambassador for everything Ireland and Germany want in their new bilateral relationship.

“I don’t understand how Irish people don’t love Germany more,” she said. “The Germans are so anxious to collaborate, so willing to give – whether it’s education, knowledge or the structure that we all need for our creativity.”

Ní Bhriain moved to Germany in 2010 and studied for eight years at Leipzig’s music conservatory, named after Felix Mendelssohn. It was a life-changing experience as an EU student, she says, with world-class teachers and facilities at her disposal for just €87.50 a semester. Since completing her masters last year, Germany keeps drawing her back.

“We Irish have such creativity but while in Germany I learned that you need structure for creativity to grow,” she said. “If our two countries take the time to work together, anything can happen.”

Other Voices founder Philip King remembers the glory days of Irish music in 1970s West Germany, when Planxty and The Dubliners were celebrated like rockstars.

“There was a deep emotional relationship but we let it fall into decline,” he said. Thursday’s second sold-out concert on the banks of Berlin’s river Spree suggests a cultural renaissance is possible between the edge of Europe and its heart.

“Now, as the world begins to spin in a very different way, we have an opportunity in front of us with the next generation,” he said, “to re-engage through music and language.”

Thursday’s concert in Berlin’s Kreuzberg neighbourhood was attended by Mr Higgins and Sabina Higgins as well as – in a diplomatic coup – German president Frank Walter Steinmeier and his wife Elke Büdenbender.

For Mr Higgins, the concert was a cultural highlight in a three-day state visit to boost German-Irish relations beyond the shadow of Brexit.

“The great energy and enrichment that our community of artists each brings to the other,” Mr Higgins told the Berlin crowd, “articulates a great empathy symbolic of that which exists between our two nations.”

Lisa Hannigan, another headliner on Thursday night, is no stranger to Other Voices or the Berlin stage.

“Part of the German spirit is the sense of collaboration and trying new things, wanting things to be new and fresh with forward thinking,” she said.

“Brexit is really going to make life difficult for any artists wanting to tour the UK, where people would normally think of first going, so Germany is going to be a much more attractive prospect.”