Price of docklands ‘progress’ a costly one for local residents

‘If someone had told me 20 years ago this would still be going on ... I would have gone’ 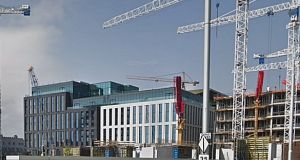 ‘If my father was dropped down here tomorrow he would not know where he was. This could be Brazil for all he’d know.’

Over the last 25 years, Dublin’s docklands have expanded upwards and outwards to attract and accommodate some 40,000 workers. Beneath the cranes and skyscrapers sits a row of petite Victorian terraced houses.

Retiree Tommy Byrne has lived on Mayor Street Upper, once a quiet cul-de-sac, for more than 40 years. He says that for much of that time, he and his neighbours have been “under constant siege” from development.

“I am not here to stop progression but they have turned this into a rat run,” he says.

By midday, Byrne’s living room is in darkness as a result of all that has been built up around him. He says his utility bills have spiked as lights and heating are needed throughout the day for much of the year. He is reluctant to open his windows as dust sweeps in from the building sites.

“Look at that dust. That’s not even on a bad day,” says Byrne after running his finger along the windowsill.

Byrne (71) says he is too old to uproot the life he has carved out in the docklands. “If someone had told me 20 years ago this would still be going on now I would have gone,” he says. “I have worked all my life, and now I am living in this dark, clammy, cold house.”

The area has lost its community feel, he says, as locals moved on, green space was snapped up and pubs were bought out. The flashy bars and restaurants of the docklands do not interest Byrne, who pines for a “good, local pub”.

“I would have to remortgage my house to buy a pint in this area,” he adds.

Sitting in his front garden on the corner of Guild Street, Declan Decko Byrne says “anyone who is not wearing a suit will know who I am”.

A dock worker’s son, Byrne (57) was born and reared in the docklands “back when it was a slum”. The neighbourhood is unrecognisable now.

“If my father was dropped down here tomorrow he would not know where he was. This could be Brazil for all he’d know.”

He says those born locally, many living in council houses, have not felt the benefits of the area changing. “It feels like a dumping ground. They have come in and broken up all of our history.”

A turn away from the main road in the North Wall area, little has changed during the regeneration years, says Amy Teeling (26).

Having grown up in a council flat in North Wall, Teeling believes the changes have been “largely positive”.

“It is lovely going around there now, but it is completely different,” she says.

The old community people “stick together”.

“There would be no mixing between the people here and there.”