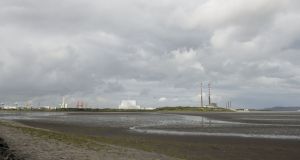 Works to scrape out the bottom of tanks at the Ringsend waste water treatment plant are expected to release ‘obnoxious’ fumes. Photograph: Brenda Fitzsimons / The Irish Times

Residents in south Dublin are preparing to hold their noses this weekend with works to scrape out the bottom of tanks at the Ringsend waste water treatment plant expected to release “obnoxious” fumes.

Irish Water has said the cleaning of debris from storm water holding tanks is necessary due to a high volume of rain last month leaving a build-up of residue.

“Irish Water would like to apologise for any odours that arise while the work is being carried out,” it said of the operation, which got under way on Wednesday and will take about a week.

The apology will smell a bit off to nearby residents frustrated by what they say are consistent problems with sewerage odours emitted from the facility.

On a hot summer’s day, it is said to be particularly unpleasant.

“A putrid, poisonous smell and an embarrassment to people who bring visitors down this direction,” said Damien Cassidy, a local resident and head of the Ringsend, Irishtown and Sandymount Environmental Group, of the situation.

“It has been persistent from the first day they opened the bloody thing. Of course it does [get worse in the summer] but it does not disappear in the winter.”

Irish Water said the cleaning works will address current odour issues and “reduce the risk of odours from the debris over the summer months”.

It will see contractors in protective clothing, with the help of a small digger, scraping out the bottom of the tanks and washing down the walls. They are carrying out the works now because of an anticipated period of dry weather. What they remove will be processed in the treatment plant.

“Unfortunately, the process of removing the debris from the tanks may create a certain amount of odour and Irish Water apologises to people in the area for any inconvenience caused,” said John O’Donoghue, the firm’s regional operations lead.

However, the utility firm has been criticised for failing to communicate satisfactorily with residents, despite alerting them through social and other media.

Labour Senator Kevin Humphreys, a resident of Ringsend, said there is demand for a text-alert system for people who wish to know what is going on at the plant and when.

“This has been ongoing and they are talking about it going on for several years,” he said. “I want to see Irish Water being much more proactive, making information more available locally to the community about what’s going on down at the plant.”

Mr Humphreys described the odour as “quite obnoxious” and said residents had various reactions from finding it a mere annoyance to keeping their windows closed on hot summer days.