‘I have offended a lot of people...I do apologise and I am going to withdraw the remarks’ 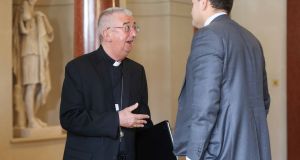 Saying his timing had “not been great” hours ahead of a meeting with church leaders, he said: “I have offended a lot of people who I never intended to offend. I am sorry for that, I do apologise.”

Before he made his apology at Dublin Castle, just ahead of a scheduled meeting with leaders of churches and ethical organisations, Mr Varadkar was seen talking to Archbishop Diarmuid Martin.

Responding, Fr Brendan Hoban, the co-founder of the Association of Catholic Priests wondered if Mr Varadkar would have said such a thing about a Church of Ireland minister.

Describing the remarks as “very hurtful”, the bishop of Waterford and Lismore, Alphonsus Cullinan, said the vast majority of priests work “so hard” and ordinary people had been “deeply offended”.

In the Seanad, Independent Senator Ronan Mullen said it was unacceptable for the Taoiseach to make a “mocking, stigmatising” comment about clergy in the fashion he had.

“I need hardly say that if someone made a similarly stigmatising throwaway remark about gay community leaders or spokespersons for the Traveller Community they would be rightly criticised.”

Echoing the criticism, Fine Gael senator John O’Mahony said that while “criminal acts” by priests needed “to be weeded out”, painting “everyone with the one brush is not acceptable”.

Independent TD Mattie McGrath described Mr Varadkar’s remarks as “utterly revolting” and “outrageous”, while Fianna Fáil Waterford TD Mary Butler said it was “simply unacceptable” that he “denigrates the entire Catholic Church”. Tolerance is needed, she said: “Unfortunately there was no such tolerance or respect shown for the Catholic religion in the Dáil yesterday,” by the Taoiseach when he made those comments.

On Thursday night, Mr Martin, responded to the apology and said: “The tone of debate wasn’t bitter or personal. I was asking him about an over run on costs of Dunkettle Interchange Project.”

Continuing, he said: “He kind of reminds me of one of those parish priests who preaches from the altar telling us how to avoid sin while secretly going behind the altar and engaging in any amount of sin himself.”