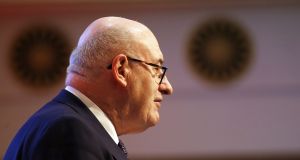 The agreement, which if ratified will allow Brazil, Argentina, Paraguay and Uruguay to export 99,000 tonnes of beef annually to the European Union, has been fiercely opposed by farming organisations.

Minister for Agriculture Michael Creed has said that the Government can use environmental concerns to “thwart” the deal, but the Government’s official position is that it will examine the deal before deciding on its position.

But writing in The Irish Times today, Mr Hogan says “some of the commentary is inaccurate and has, in some cases, been used disingenuously to argue against other aspects of the agreement.”

The central core of the Mercosur agreement is “that trade should not happen at the expense of the environment or labour conditions: on the contrary, it should promote sustainable development,” says the Fine Gael former minister.

He says the Mercosur countries have committed to implement the Paris global warning agreement, while Brazil has included specific commitments on preventing deforestation of the Amazon.

Opposition parties and farming organisations kept up their criticisms of the agreement. In the Dáil, Fianna Fail’s deputy leader Dara Calleary said that the deal “goes against all of the principles, beliefs and declarations relating to climate change”.

“It will sound the death knell for Irish beef and severely damage the Irish poultry sector,” he said.

Mr Calleary said that the Brazilian government was “clearing rainforests at a rate of knots in order to make room for cattle which will be sold as part of this deal.

“Every 15 seconds, an area of rainforest the size of a football pitch is cleared. Since president [Jair] Bolsonaro took office, the level of deforestation has accelerated. The EU Commission is saying, ‘Go ahead,’ and giving him a clap on the back,” he said.

Minister for Social Protection Regina Doherty appealed to other parties to be on “Team Ireland” and work with the Government to “get a better result and a better transposition of what is a headline agreement into the legal text”.

She said that Mr Hogan was part of Ireland’s “skilled negotiating team in Europe”, though all European commissioners take an oath to be independent of their own countries.

Meanwhile, the Government spokesman has indicated that Taoiseach Leo Varadkar does not intend to bring forward any nomination to the European Commission in the immediate future.

Opposition politicians – and some Fine Gael TDs – have been critical of Mr Hogan for his defence of the Mercosur deal, and have suggested that Mr Hogan should not be reappointed for a second term.

The belief in Brussels, however, is that Mr Hogan is likely to be appointed to the commission where he would be expected to receive a senior portfolio.

His name has been linked to the trade commissioner’s job, which would be of particular relevance to Ireland, given that a trade deal with the UK is likely to be negotiated over the coming years once Brexit happens.