Almost half laboratories used by CervicalCheck not inspected 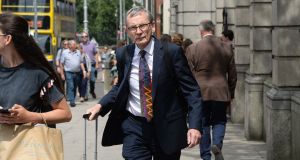 Dr Gabriel Scally said the number of slides sent to laboratories used in the CervicalCheck programme could only be tracked through the billings systems of laboratories, not by their clinical registers. Photograph: Dara Mac Dónaill

Seven of the 16 laboratories involved in the CervicalCheck scandal were not inspected by the team set up to investigate it, and they have now closed down, an Oireachtas committee has been told.

Speaking to the Oireachtas Committee on Health, the head of the inquiry, Dr Gabriel Scally said “real difficulties” existed about finding out the number of Irish women’s slides that were sent to some laboratories.

In one case, Dr Scally, who presented his second report into the CervicalCheck programme last month, said the number of slides could only be tracked through the billings systems of laboratories, not by their clinical registers.

In last month’s report, it emerged that 16, not six laboratories were involved in testing smears because the original contractors had sub-contracted work to other laboratories without the knowledge of the Health Service Executive (HSE).

Shane McQuillan from management consultants Crowe Ireland said nine of the 16 laboratories had been visited. “Some of the laboratories no longer exist,” he added.

Two of the laboratories had carried out only a very small number of smears and one of them was based in Hawaii. It was not practical to visit them, Mr McQuillan told the Oireachtas committee.

Clinical Pathology Laboratories in Orlando, Florida, which was part of the Sonic Group, closed a few years ago. It had been involved in cervical smear testing between 2010 and 2012. It closed for commercial reasons.

No evidence has been found that any of the now-closed laboratories were shut because of complaints or adverse findings at the time, Dr Karin Denton, a UK-based consultant, said.

In his contribution, Dr Scally said when he and Dr Denton worked in the southeast of England, they had spent a long time closing small screening laboratories because “small labs are just bad news”.

Dr Scally began his CervicalCheck inquiry after it emerged more than 200 women who developed cervical cancer were not told of an audit carried out on their earlier test results. In some cases, a review of smears produced a different result from the original.

Fianna Fáil’s health spokesman Stephen Donnelly said he was “shocked” to discover that so many of the smears had been outsourced to other laboratories without the knowledge of the HSE.

State contracts with foreign companies must be made watertight in future to prevent a repeat, he declared. Mr McQuillan said the HSE had taken “very good steps to strengthen that considerably”.

Asked by Fine Gael TD Kate O’Connell if he was shocked, Dr Scally* said: “I have never seen the likes in my long career. Organisationally and structurally I had never seen anything quite as wrong from top to bottom.”

Dr Scally stressed that the CervicalCheck programme is a very good programme and it is capable of producing “outstanding results ironically because of the attention that has been paid to it”.

Dr Denton said not many countries had a screening programme as comprehensive as Ireland. “Ultimately it does compare well to what’s available in other European countries.”