US vice-president Mike Pence to visit Ireland in September

Evangelical Christian, whose grandfather emigrated from Sligo, is expected in September 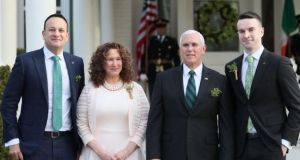 Taoiseach Leo Varadkar and his partner Matt Barrett with US vice-president Mike Pence and his sister Anne Pence Poynter at the vice-president’s official residence in Washington DC in March. Photograph: Brian Lawless/PA Wire

US vice-president Mike Pence is to visit Ireland in September, his first trip here in an official capacity.

Mr Pence, who has family roots in Ireland, is expected to arrive for a three-day visit during the first week of September.

Official contacts have been underway between the Department of Foreign Affairs and the office of the vice-president in Washington in recent weeks.

It is expected Mr Pence will visit Dublin, Cork and Shannon. A meeting with Taoiseach Leo Varadkar is expected to take place, while an engagement with President Michael D Higgins is under consideration.

Mr Pence, a former governor of Indiana, was chosen by Donald Trump to become his running-mate in July 2016. In January 2017 he was sworn-in as vice president.

Mr Pence, an evangelical Christian who is well-known for his opposition to gay marriage, hosted Mr Varadkar and his partner Matt for the traditional St Patrick’s Day breakfast in Washington in March. Mr Varadkar extended an invitation to Mr Pence to visit Ireland. It is understood Mr Pence will be accompanied by his wife and members of his extended family.

He will be the latest senior US politician to visit Ireland this year. In June,Mr Trump visited Doonbeg, meeting the Taoiseach at Shannon Airport. Democrat Nancy Pelosi, the speaker of the US House of Representatives, led a congressional delegation to Dublin and Northern Ireland in April.

During his St Patrick’s Day meeting with Mr Pence, Mr Varadkar said he was honoured to accept his invitation. “I stand here this morning as leader of my country, flawed and human, but judged by my political actions and not by my sexual orientation or my skin tone or my gender or religious beliefs.

“And I don’t believe my country is the only one in the world where this story is possible.

“It is found in every country where freedom and liberty are cherished. We are after all, all God’s children.”

Mr Pence has visited Ireland several times and has spoken publicly about his love for Ireland.

In March 2016, shortly after his swearing-in as vice president, he was honoured by the Ireland Funds at the organisation’s annual gala dinner in Washington, which was attended by then Taoiseach Enda Kenny. He described how he thought about his grandfather Richard Michael Cawley arriving in Ellis Island in 1923 on the day he was inaugurated as vice-president.

“I just keep thinking of that day in April 1923 when Richard Michael Cawley stepped off the boat in Ellis Island. I can’t imagine what the sight of the statue of liberty meant to him that day. The torch of freedom,” he said.