Halloween: Dublin Fire Brigade gets thousands of calls ahead of busiest night of year 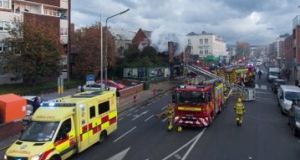 Ambulance and fire crews deal with a fire at a property on Clanbrassil Street, Dublin. Photograph: Dublin Fire Brigade

Dublin Fire Brigade has received more than 3,000 calls in the last week, as the fire and rescue service prepares for its busiest night of the year on Thursday.

The fire brigade’s control centre has reported 331 fires from October 21st until October 28th. It has received 2,522 ambulance calls and 555 calls for fire services over the same period.

Local authorities are continuing to urge the public to report any stockpiling of bonfire material. Dublin Fire Brigade has said reports of stockpiling “seem to be down on other years”.

Between September 1st and October 30th, 2018 there were 287 reports of stockpiled materials made to Dublin City Council. Reports are down just over 30 per cent to 197 in the same period this year.

“We are hopeful that the reduction in reports will ultimately translate into less materials being required to be recovered from stockpiling,” a council spokesman said.

Gardaí are investigating a fire at a derelict house on Clanbrassil Street Upper in Dublin 8 on Tuesday evening. The fire occurred at about 4pm and gardaí said a “large amount of damage” was caused to the property.

There was nobody in the house at the time of the fire and gardaí at Kevin Street Garda station said their investigations are ongoing.

Four fire engines attended the scene and Dublin Fire Brigade said it responded “after reports that a bonfire stockpile had been set alight”.

AA Roadwatch has called on motorists to be “safety conscious” and warned of darker conditions on the road following the changing of the clocks at the weekend.

The motoring group said drivers should reduce their speed, particularly when driving through built-up areas, and to be on the lookout for children who could step onto the street without looking, pedestrians and animals who could be startled by fireworks.

Veterinary Ireland has issued advice to pet owners on how to keep animals safe this Halloween.

“Ideally, try and ensure that someone remains with your pet when fireworks will be heard, and especially on the night of Halloween,” it said.

The group has also advised providing a den or hiding place for pets to feel safe and to make sure dogs are exercised early in the day.

“Keep your pet inside with the doors and windows closed and your favourite radio station switched on in the room. Provide an extra litter tray for cats,” it added.

A programme of events has been organised by Dublin City Council for the Halloween period, including the Dockers & Demons Festival in the Ringsend/Docklands area, the Cauldron of Smithfield, the Phantom of the Flats in Dorset Street and the Ballymun Otherworld Festival.

A screening of Hocus Pocus will take place at the Cabbage Patch Gardens off Kevin Street on Thursday evening and “zombie fun runs” will be happening in Brickfield Park and Sundrive Road.

In Kenmare, Co Kerry the annual Halloween parade will be held on Thursday evening as part of a week-long Halloween Howl community festival with free and paid family-orientated events.

Beginning on Thursday, the three day Puca Festival offers a range of events in Athboy, Trim and Drogheda celebrating the ancient Celtic traditions of Samhain. A variety of offerings (free and paid) include children’s workshops, poetry, song and the lighting of the Samhain fires.

In Wicklow town between 1 and 4pm, Wicklow Gaol is hosting spooky ghost tours for “little monsters”. Tickets cost € 8 for children and € 11 for adults.

In Belfast, Let’s Go Hydro water sports resort, ten minutes from City Hall, is planning a Halloween fireworks display. Tickets cost £7 per adult and £4 per child. And At Ghoulsley’s Manor in Cobh, Co Cork, Thursday is the final night of The Curse of the Purple Pumpkin event “where you become part of the story”. Tickets cost €16.