No-deal scenario recedes into realm of improbable, but planning continues

Pause in Brexit-related politics in Ireland finally expected during November 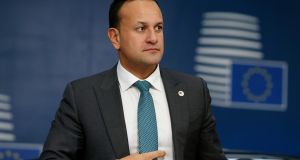 Taoiseach Leo Varadkar and the Cabinet will be briefed by Tánaiste Simon Coveney on Wednesday on the implications of another dramatic Brexit week. Photograph: Julien Warnand/EPA

For the Irish Government, the most important moment on Tuesday was, surprisingly, not British Labour leader Jeremy Corbyn’s announcement his party would agree to an election.

It was a tweet from the outgoing EU Council president Donald Tusk all but confirming that a no-deal Brexit was no longer on the table.

While nothing is ever guaranteed – as Taoiseach Leo Varadkar reminded people, “there’s many a slip between cup and lip” – Tusk’s tweet allowed a sigh of relief, a no-deal scenario has finally receded into the realm of improbable.

Tánaiste Simon Coveney will brief the Taoiseach and Cabinet colleagues on Wednesday on the implications of another dramatic Brexit week for the Irish State and for the island of Ireland. Unlike a multiplicity of previous briefings, this one will be almost wholly positive.

That said, as one source cautioned on Tuesday, much remains that is tentative.

“Brexit is going to happen one way or the other. There is still a requirement for business to prepare. Export businesses will need to diversity and look at new markets.

“Despite the more positive soundings, no-deal planning continues for as long as necessary. The whole approach is to protect our priorities, to be prepared for whatever Brexit takes place.”

Diversification for Irish agribusiness and exporters will form some of Mr Coveney’s briefing on Wednesday. He is also expected to give his department’s take on the latest developments in Westminster and Brussels, and assess how they will impact on the State.

In recent days, Britain has stood down some of its more extreme contingency plans for a crash-out Brexit such as Yellowhammer. But while the Government here rushed an omnibus Brexit Bill through the Dáil in March (to provide for a worse case scenario) sources on Tuesday said the central case for Ireland was always that Britain would leave with a deal.

“It is what emerged form the Cabinet meeting in Derrynane [Co Kerry] July 2018, that the British would leave with a deal. We never turned away from that central case. We never moved to red alert and do not have to turn it down.”

The Westminster election will be viewed by the Government as a “completely internal matter” for Britain. It is expected that with the pause in Brexit legislation, there will also be a pause in Brexit-related politics in Ireland during November. That window has led to calls within Fine Gael for the Taoiseach to press ahead and move a general election in the Dáil on November 7th, rather than the four byelections.

The Taoiseach’s official position remains that he prefers an election date of May 2020. His officials constantly point out, however, that he offered that date to Fianna Fáil leader Micheál Martin as part of a comprehensive package, but Martin turned it down. Some view that coda as a “get-out clause” that gives the Taoiseach cover if he calls an election.

If not, there is not expected to be much movement until the outcome of a British election becomes clear, and with it the nature and timing of Brexit. “Steady as she goes, that’s what we are aiming for right now,” said one source.