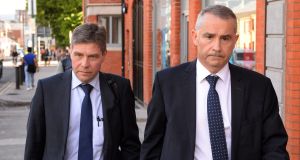 The directors of Quinn Industrial Holdings (QIH) have received a second death threat, warning them that they “haven’t learned your lesson” from last month’s abduction and torture of one of its executives Kevin Lunney.

The letter, sent to The Irish News and shared with directors of QIH late on Monday, claims to be the “last warning” to the five local managers of the company to resign or face a “permanent solution”.

Referring to the kidnapping and violent attack on Mr Lunney on September 17th, the letter warns that the perpetrators “could have killed him very easily” if they had wanted to.

Reacting to the latest threat against him and his fellow directors, Mr McCartin said the intimidation would “not go away until the paymaster is caught”.

“Until they get the person who procured, financed and resourced this crime, this will continue and we can look forward to more of the same. There is an emboldened criminal element among us and the head of the snake needs to be cut off,” he said.

Mr McCartin said the company was assessing the safety of the five directors on a daily basis and that the Garda was taking this latest threat “very seriously.” He said he was informed about the threat when gardaí called to his home on Monday night.

Referring to the latest threat and the suspected arson attack on the car of Sinn Féin TD Martin Kenny in nearby Co Leitrim in an unrelated incident early on Monday, Mr McCartin said: “When you add all these things together, it is an ominous sign of something very dark in our midst.”

A spokesman for QIH said: “Regrettably, continuing threats are no surprise to QIH. It is just proof positive that this issue will not be resolved until the paymaster behind it is brought to justice and law and order is restored to this peace-loving community.”

Minister for Justice Charlie Flanagan described the latest threat against the QIH directors as “a most chilling and sinister development.”

“Obviously, this is a classic case where cross-border cooperation is needed,” Mr Flanagan told RTÉ News.

A spokeswoman for the Garda said that it continued to work closely with the PSNI and the board of directors of QIH “in relation to all matters currently under investigation.”

A previous threat was issued to the directors in May, four months before Mr Lunney was kidnapped near his Fermanagh home and subjected to a sustained attack over more than two hours. His leg was broken and his face and torso were slashed before he was dumped on a roadside in Co Cavan.

“This is your last warning to resign to the directors of QIH; obviously you haven’t learned your lesson after what happened to Kevin,” the latest threatening letter, a copy of which has been seen by The Irish Times, says. “If we wanted we could have killed him very easily.”

The letter also warned council members in Cavan and Fermanagh or contractors not to remove any signs that have been erected in the area criticising the five businessmen for their management of QIH, the name given to the firm after local businessman Sean Quinn lost the firm following multi-billion losses on his investment in Anglo Irish Bank.

It warns that “anyone that removes the signs whether that be council employees or outside contractors will be targeted – all of this will be brought to a conclusion very shortly.”

The writer or writers of the letter express support for Mr Quinn and his family in the hope that they will regain control of the industrial businesses that were lost in 2011.

“We have learned that there was repeated attempts made by Sean Quinn to talk to senior directors to bring about a solution and conclusion but the directors refuse to reply,” the letter states.

“Directors of QIH were given a mandate to hold the company in safe hands for the Quinn family until a position was put in place to buy it back. The local community won’t stand by any longer and see it continue in its current projectory [SIC],” it continues.

“The Quinn family that employed hundreds of people were stabbed in the back. We have the capability and the manpower to see this through until the end and achieve a permanent solution.”

Mr Quinn and his family have repeatedly condemned acts of vandalism and violence against their former businesses and properties and the executives who worked in the family enterprise over the years. They have disavowed the campaign of violence and distanced themselves from any acts purported to be carried out in their names.

The businessman told Channel 4 News last month that he had “no hand, act or part” in the attack on Mr Lunney but criticised how Mr Lunney, Mr McCaffrey and Mr O’Reilly had treated him when he left as an adviser to the company in 2016.

The former billionaire, once reputed to be the country’s richest man, made overtures to QIH in recent months in an attempt to regain ownership and control of his former business under the false impression that the company was about to be sold by its majority owners, three US investment funds.

In May, Mr Quinn wrote to the three funds, appearing to express regret over his falling out with the company that led to his departure from his €500,000-a-year role as an adviser.

He clashed with the owners and managers of the business over his desire to take ownership of the company again and claimed that he was being excluded from decision-making meetings.

“On reflection, perhaps my passion for the business, and my enthusiasm to ensure that it was successful, meant that my views were not always articulated in the most appropriate manner,” he wrote in his letter.

He sought a meeting, believing that he had “the expertise, goodwill and raw materials that are necessary to make the company successful again.”