‘The stars are aligned’: Momentum builds in FG for November election 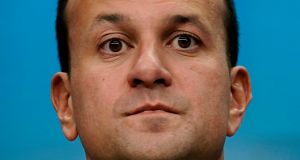 Leo Varadkar: the Taoiseach’s stated preference is for an election in May 2020. FIle photograph: Kenzo Tribouillard/AFP/Getty

Fine Gael Ministers and TDs have expressed divergent views on whether a general election in Britain would open the door for a November election in Ireland.

However, there seems to be more momentum gathering for an early election within the main Government party, notwithstanding the fact Brexit has not been fully resolved and the Taoiseach’s stated preference that the election should be held in May 2020.

Fianna Fáil and other parties say they are prepared for an election whenever it happens.

Yesterday Fianna Fáil leader Micheál Martin said there was very little difference between his preference for a spring election and the Taoiseach’s preferred option of May. He again argued against an early election.

“There is no reason whatsoever for the instability and speculation we’ve seen over the last few weeks. There’s a full budget schedule until the end of the year and a backlog of important legislation that needs to be passed. Everyone should just get on with the work in front of them.”

The time is now

The Irish Times contacted 25 Fine Gael TDs yesterday, as well as several party advisers, and received 14 responses, all speaking on the basis of anonymity. While there were divergent views on the timing of an election, a majority argued – some trenchantly – that the optimal time for the party was now.

“It makes absolute sense to go now, on November 29th,” said a Minister of State. “There is a lull in Brexit proceedings, the prospect of a no-deal Brexit is receding, Fianna Fáil is on the back foot on ‘Votegate’.

“The positive afterglow from the successful Brexit negotiations will only last so long. By-elections give Fianna Fáil opportunity to regain lost ground.

“Putting it simply, no other confluence of events will present an opportunity like this again. The stars are aligned.”

Another senior figure said that the last time a Fine Gael leader was faced with such a decision was Enda Kenny in October 2015. “He rued the day of not going early. We will never get as good a chance. By January, the kudos will not last.

“If you have to fight election, fight it on front benches. Fianna Fáil has been wounded. We have Simon Coveney and Helen McEntee on Brexit. For Fianna Fáil, of its two main players, Niall Collins is gone and Lisa Chambers is damaged.”

The person said the decision would be Mr Varadkar’s. “Ultimately the case comes down to one man taking a massively brave decision.”

A Dublin-based TD said: “Most of ours are hopping for an election [although] the more seasoned crew are more cautious than the choirboys.”

Another Dublin TD said he did not believe an election was in the best interests of the country at the moment.

Two senior Ministers argued that the Government should move now. “It’s a safe time in an uncertain world,” said one.

However, another senior Minister said Brexit had not been done. “Besides”, added the Minister, “the people of Ireland would prefer carol singers to canvassers in shopping centres and on doorsteps”.

A younger rural TD said now was the least-bad option if Fianna Fáil did not agree a date in May.

“There is still a significant risk, and it is not ideal, but the Taoiseach loses control post-December without agreement from Fianna Fáil.”

A rural Minister of State agreed: “If the choice is between now or May it would be May, but if it is now or February [if the Government is brought down by Fianna Fáil], it would be now,” he said in the text.

Another urban-based parliamentarian said there was enough clarity that there would not be a no-deal to allow an early election.

Labour and the Social Democrats said separately they were ready to contest an election at any time. Neither the Greens nor Sinn Féin responded to queries.