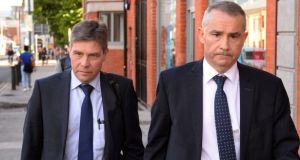 The latest threat to directors of Quinn Industrial Holdings (QIH) did not come as a surprise, according to one of the company’s directors.

John McCartin, a non-executive director with QIH was speaking following receipt of a second death threat this week. The directors of QIH received the threat on Monday, warning them that they “haven’t learned your lesson” from last month’s abduction and torture of one of its executives Kevin Lunney.

Mr McCartin told Newstalk Breakfast that the campaign is likely to continue until whoever is financing it is brought to justice.

“What happened to Kevin Lunney couldn’t have happened without somebody sitting down planning, procuring and financing it.

“The finance of an operation like that - involving between 12 to 20 people, I’m told is estimated by the experts, stealing vehicles, having them disposed of, getting a site for the torture to be conducted - all of that requires a lot of planning and a lot of money,” he said.

The death threat, sent by letter to The Irish News and shared with directors of QIH late on Monday, claims to be the “last warning” to the five local managers of the company to resign or face a “permanent solution”.

Referring to the kidnapping and violent attack on Mr Lunney on September 17th, the letter warns that the perpetrators “could have killed him very easily” if they had wanted to.

Mr McCartin said Mr Lunney is a “robust character” and is making “as good a recovery as you could expect him to make from such an ordeal.”

“Physically he has a bit of a road ahead of him and mentally he is robust and determined.”

When asked whether the directors would consider stepping away from the company, he warned that would put thousands of jobs in the region at risk and could embolden the criminals to continue their attacks.

He said he believed gardaí in the area are well resourced and are carrying out a “very, very thorough” investigation.

QIH chief executive Liam McCaffrey said it is difficult to deal with a small group of criminals led by a task master. Mr McCaffrey said, “We just have to trust in the Garda Síochána and PSNI investigations.” It was horrendous for any civilised society to have to operate with such sinister threats, he said.

Mr McCaffrey also said he and his fellow directors have been heartened by the support of customers, staff and the community following receipt of the second death threat.

Assistant Garda Commissioner for the North West Region, Barry O’Brien, has said that despite the latest threat, he is confident of progress in the on-going investigation.

Gardaí and the PSNI have been very successful in the past in tackling criminality in the Border region and a substantial investigation is now underway, he told RTÉ’s News at One.

Protective measures have been put in place both in the Republic and across the Border for QIH directors with both forces working closely to bring the perpetrators to justice, he said.

The letter also warned council members in Cavan and Fermanagh or contractors not to remove any signs erected in the area criticising the five businessmen for their management of QIH, the name given to the firm after local businessman Sean Quinn lost the firm following multi-billion losses on his investment in Anglo Irish Bank.

It warns “anyone that removes the signs whether that be council employees or outside contractors will be targeted – all of this will be brought to a conclusion very shortly.”

The writer or writers of the letter express support for Mr Quinn and his family in the hope that they will regain control of the industrial businesses that were lost in 2011.

“We have learned that there was repeated attempts made by Sean Quinn to talk to senior directors to bring about a solution and conclusion but the directors refuse to reply,” the letter states.

“Directors of QIH were given a mandate to hold the company in safe hands for the Quinn family until a position was put in place to buy it back. The local community won’t stand by any longer and see it continue in its current projectory [SIC],” it continues.

“The Quinn family that employed hundreds of people were stabbed in the back. We have the capability and the manpower to see this through until the end and achieve a permanent solution.”

Mr Quinn and his family have repeatedly condemned acts of vandalism and violence against their former businesses and properties and the executives who worked in the family enterprise over the years.

They have disavowed the campaign of violence and distanced themselves from any acts purported to be carried out in their names.

The businessman told Channel 4 News last month that he had “no hand, act or part” in the attack on Mr Lunney but criticised how Mr Lunney, Mr McCaffrey and Mr O’Reilly treated him when he left as an adviser to the company in 2016.

The former billionaire, once reputed to be the country’s richest man, made overtures to QIH in recent months in an attempt to regain ownership and control of his former business under the false impression that the company was about to be sold by its majority owners, three US investment funds.

In May, Mr Quinn wrote to the three funds, appearing to express regret over his falling out with the company that led to his departure from his €500,000-a-year role as an adviser.

He clashed with the owners and managers of the business over his desire to take ownership of the company again and claimed that he was being excluded from decision-making meetings.