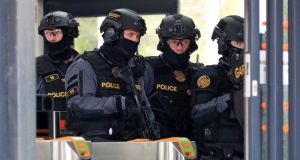 Armed gardaí were called to help officers during the fracas in Cork on Thursday night.

Gardaí are to prepare a file for the Director of Public Prosecutions after arresting and questioning two men about an incident in which a group armed with a machete and a hurley began attacking a soccer team as they took refuge in their cars.

Members of the Armed Support Unit were deployed to provide support for uniformed and plainclothes officers as they sought to deal with the incident which happened near Wilton on Cork’s southside at around 7.30pm on Thursday.

A row broke when two men in their 20s and a teenager, who were all highly intoxicated and had been refused entry at Dunnes Stores in Bishopstown, confronted members of Richmond FC who were training on their pitch at Garrandarragh off Sarsfield’s Road in Wilton.

The soccer team were doing their warmup exercises when the three men came on to their pitch and one of them demanded a football so the soccer team gave him a ball in the hope of getting rid of them but one of the others then started verbally abusing the soccer players.

A row broke out and the soccer players were forced to defend themselves and the three young men left the scene after a brief exchange of blows but they returned a short time later in a car with two other men and they went to attack the soccer players with a machete and a hurley.

The soccer players took refuge in their cars but the men began attacking the vehicles with the machete and the hurley, smashing in windscreens and side windows in five of the cars before a uniformed Garda officer arrived from Bishopstown.

The men began to verbally abuse the garda who called for back-up and he was soon joined by six members of the Armed Support Unit (ASU) armed with guns, tasers and pepper spray as well as other uniformed and plainclothes officers from Togher and Bishopstown stations.

The ASU quickly brought the situation under control without having to deploy their weaponry and arrested two men who had stripped down to their waists and were highly intoxicated and aggressive towards officers.

The two men were arrested for public order offences and taken to Togher Garda Station where they were questioned when they sobered up and calmed down and they were later released without charge. Gardaí will now prepare a file on the incident for the DPP.

The other three members of the group, including a teenager, were not arrested but were instructed by gardaí to return home which they did as up to a dozen gardaí worked to restore calm.

One member of the Richmond FC team had to be taken to Cork University Hospital for treatment for non-life-threatening injuries after he suffered cuts to his face when taking refuge in the back seat of a teammate’s car and the window was smashed in with a hurley.

Gardaí carried out a search of the area and recovered a machete and hurley hidden in nearby undergrowth.

They also carried out a forensic examination of the damaged cars. They harvested some CCTV footage from the vicinity of the soccer pitch and have begun examining it.

1 Aaron Brady, the man who said with pride he was a cop killer
2 Aaron Brady found guilty of capital murder of Det Garda Adrian Donohoe
3 A chronicle of dignity and despair
4 State to investigate claims of bogus employment practices in meat sector
5 A year after Nóra Quoirin’s body was found, her parents still believe she was abducted
Real news has value SUBSCRIBE