Covid-19: Taoiseach pledges support and safe return to work for all 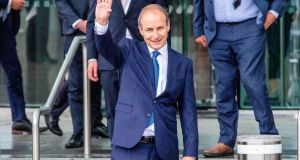 Taoiseach Micheál Martin said he is worried about the ‘continuing volatility’ around the virus internationally. File photograph: Getty

Taoiseach Micheál Martin has said no one will be “falling off a cliff” when the Covid-19 unemployment payment concludes and that his Government will invest to ensure a “safe return to work” for all.

Mr Martin said a number of Bills that are to be introduced this month would focus on helping people get back to work and supporting small- and medium-sized companies, which he described as “the engine room of our economy”.

The Taoiseach said he expected the annual budget deficit to grow further, to between €25 billion and €30 billion, but insisted the Government was committed to protecting livelihoods and jobs.

During his first live television interview as Taoiseach, Mr Martin told RTÉ’s Six One News he would work to maintain “harmony” and a “common unity of purpose” among the members of the three coalition parties.

Mr Martin said he believed the programme for government represented “fundamental change” in terms of dealing with the threat of climate change and helping people access affordable and public housing.

Asked whether he was planning to extend the Covid-19 pandemic unemployment payment, which due to remain in place until August 10th, the Fianna Fáil leader said no one would be “falling off a cliff”.

He said the recession facing the State as a result of the pandemic is “very different” to the one which followed the economic crash in the late 2000s. The most effective way out of it, he said, would be through “additional investment and funding into the economy”.

Mr Martin said he is determined to see schools reopen at the end of August and that children need to get back into an education environment. However, he warned that if the prevalence of the virus spikes between now and August, the planned reopening of schools in the autumn could be jeopardised.

On international travel and the publication of a Green List of safe countries people can visit, as proposed by the previous government, Mr Martin said a Cabinet sub-committee would discuss the matter on Friday but that he was “cautious” about the situation.

“We’ve made great progress in suppressing the virus . . . we have to be very careful that the next steps don’t in any way undermine that progress,” he said.

Mr Martin said he is worried about the “continuing volatility” around the virus internationally and emphasised that the State’s economic recovery would depend on continued suppression of Covid-19.

He said the Government planned to develop capacity within the Irish acute hospital system and expressed concern around the impact of the pandemic on people suffering from other illnesses and diseases. He said investment in technology would play an important role in developing the health system, while also creating new jobs.

The Taoiseach said he would give particular priority to a “shared Ireland” and that new units were being developed within his own department to work on an all-Ireland basis.

Powersharing in the North

Asked if he was worried whether calls for Northern Ireland Deputy First Minister Michelle O’Neill to step down from her role could collapse powersharing in the North, Mr Martin replied that such a situation “could not be contemplated on this occasion”. Ms O’Neill is embroiled in a political storm over alleged breach of social distance rules at the Bobby Storey funeral on Tuesday.

Mr Martin said the pandemic had facilitated a “coming together” of the Northern Executive and gave a “synergy and dynamism” to Stormont that had not been seen before.

“I think it’s very important we look at the big picture, keep the assembly intact, keep the Executive intact and work for the betterment of all the people on this island,” he said.

Asked about his decision to appoint deputy leader Dara Calleary as Chief Whip rather than to a ministry, Mr Martin replied that the position was “important and influential” and wielded “significant influence” in Government.

He said Mr Calleary is a “very able individual” and that he “wouldn’t understate the importance of the Chief Whip’s position”.