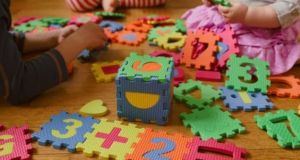 Most full-time childcare providers are expected to reopen their doors to thousands of children today for the first time since mid-March. Photograph: iStock

Most full-time childcare providers are expected to reopen their doors to thousands of children today for the first time since mid-March.

Childcare providers estimate that about 85 per cent of the 1,800 full-time services which normally operate during the summer months are set to open on Monday morning.

It is uncertain how many parents will avail of childcare due to the numbers of parents still working from home or concerned about the health implications of returning their children.

Childcare providers anticipate that many children will have attachment issues, given that so many are out of routine and have spent so long with parents.

Parents in many cases are being asked to hand their children over to staff at reception areas or entrances to childcare facilities instead of entering the premises. Many providers have also installed perspex screens at entrances and invested in additional outdoor play equipment, in line with public health guidance.

Parents have been assured that they will not need to pay higher fees than they did before the pandemic. This is a condition of a State-funded financial support package which providers have signed up for.

The temporary wage subsidy scheme will continue to provide up to 85 per cent of staff costs until the end of August.

Early Childhood Ireland, the largest representative group for childcare staff , said it was positive sign for the sector that so many are set to reopen.

“They are good, hopeful numbers. They will give confidence to other operators, because there are mixed emotions. Some staff are worried and anxious, but many are confident and looking forward to reopening,” said Teresa Heeney, Early Childhood Ireland’s chief executive.

“There is a real commitment to taking the public health guidance and running with it, so lots will be spending more time outdoors. Many of the other requirements are not a big shift for us. We’re used to handwashing, personal protective equipment and low child-staff ratios.”

She said she hoped more facilities will reopen over the coming weeks and that a funding package will be in place for an estimated 2,800 other providers which typically reopen in late August.

Seas Suas, which represents independent childcare providers, said its providers also looked forward to reopening but warned that decreased demand and increased costs posed major risks to the long-term viability of the sector

The group’s chairwoman Regina Bushell said the sector requires longer-term support to ensure it is viable beyond August, the point at which funding support has been signalled to end.

It estimates that a €130 million support package is needed until the end of this year.

The Federation of Early Childhood Providers also said it was happy to be back at work in a safe and secure environment, with extensive healthy protocols in place.

But it warned that funding was not sufficient to cover the operating costs of childcare providers and many face going out of business in the weeks ahead.