Covid-19 continues to rampage where it meets least resistance 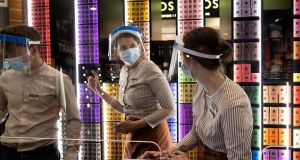 The signs from around the world are troubling. The United States has just reported its highest daily case figures so far in this pandemic. Localised outbreaks in Germany have forced authorities there to reimpose restrictions in some regions.

While Ireland was successfully bringing the disease under control, Covid-19 has continued to careen about the world, prospering wherever it meets least resistance.

Whereas it took 12 days to go from one to two million cases globally, the latest jump from eight to nine million cases took just six days.

It isn’t all bad news, thanks to fast-tracked vaccine research and studies that show the use of specific therapies in treating patients. The steroid medicine dexamethasone, for example, has saved the lives of a third of people on ventilators, a study has found. Meanwhile, three potential vaccines are in final-phase testing after positive earlier results, and dozens more candidates are in development.

In Ireland, the estimated prevalence of the virus has plummeted, from one in 1,200 at the peak of the outbreak to about one in 40,000 in the community now. The disease has remained effectively suppressed even as we began to reopen society.

The challenge of keeping it suppressed will rise massively from next week, when a much wider opening up of activities is permitted. Beyond that, in July, it seems likely restrictions on foreign travel will be eased, as tourism tries to get back on its feet.

This prospect has many experts on edge. Opening up society inevitably means people are moving about more and the virus is more easily spread. The key questions are whether outbreaks can be contained locally and whether the health service will be able to cope with any resurgence of Covid-19.

As said before, effective testing and contact tracing are central to controlling the spread of the virus. The Health Service Executive now has the capacity to test large numbers of people but overall speeds are less than demanded by some scientists.

Because there are so few cases at present, both testing and contact tracing are currently operating well below capacity, but even so the process of tracing contacts of a confirmed case is proving troublesome in some cases.

It is concerning that the published data on the performance of the contact-tracing system has not been available for the past two weeks due, the HSE says, “to work being undertaken on the relevant systems”.

Further speeding up of turnaround times requires the establishment of more lab capacity, so that testing can take place as close as possible to where the infection occurs. Whether the extra cost could be justified depends on whether you think the next surge can be contained with the resources we have.

The second unknown is whether or not the hospital system will be able to cope.

Current critical-care bed capacity stands at 438, compared with 500 at the peak of the crisis in mid-April. Of these, 355 beds are open and staffed, compared with 415 before.

Capacity is well up on pre-crisis levels, as is the supply of vital equipment such as ventilators.

The number of beds occupied has dropped only slightly over this time, from 280 to 267. The type of patients in critical care has changed dramatically – the number of Covid-19 patients fell from 144 in mid-April to 12 last Thursday – as people return to the system for treatment of non-Covid ailments.

As of last Thursday, there were just 73 critical care beds available, compared with 135 in mid-April. It is hard to see how this level of capacity could deal with a major resurgence of cases – unless the hospitals were to be cleared of non-Covid work yet again.

The safety valve of the private hospital system will be gone from next week when the State’s deal with them ends, against the wishes of the HSE. Talks are ongoing with the Private Hospitals Association in relation to future use of private capacity, but there has been no outcome as yet.

Meanwhile, the HSE’s lease on Citywest, which was used as an isolation centre for Covid-19 patients, ends in October. The future of isolation lies in smaller units in the regions, such as the centre set up in Limerick.