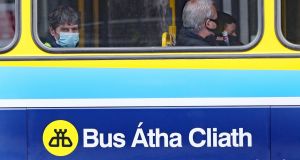 Dublin Bus told the NTA that 52 per cent of its customers were covering their faces as Wednesday, up from 41 per cent on Monday. Photograph: Niall Carson/PA

In June former minister for health Simon Harris said wearing masks would be mandatory “under the emergency health regulations”.

But it later transpired the departments of Health and Transport are currently working on a detailed regulation to cover the face masks issue, which is expected to be imposed next week.

Passenger journeys on the Luas rose in number from just over 29,027 on Monday June 22nd, to almost 36,000 on Monday June 29th, the day Phase Three of lifting of Covid-19 restrictions came into effect. Numbers jumped again the following day to almost 38,000.

Increases were also recorded by Go Ahead Ireland bus services in Kildare, Dublin and Wicklow, while Bus Éireann supplied estimated figures which did not change over the week to June 29th.

However figures provided by individual transport companies to the National Transport Authority show a mixed reaction from the public to wearing face masks on public transport.

According to the NTA the response of passengers varies with up to 90 percent compliance on some services, to just 40 per cent on others .

Iarnród Éireann reported that 60 per cent of passengers arriving and departing from Heuston Station were using face coverings, a significant increase on previous weeks.

Dublin Bus told the NTA that 52 per cent of its customers were covering their faces as Wednesday, up from 41 per cent on Monday.

On Bus Éireann commuter services in the Greater Dublin Area, compliance is running between 75 per cent on some services and 98 on others on the NTA said.

Three in four passengers on Bus Éireann city services in Cork and Waterford are wearing face covering, and while the rate in Limerick and Galway is lower at 40 per cent, it was said to be increasing.

More than 90 per cent of passengers on Local Link services in places such as Donegal, Laois/Offaly, Waterford, and Longford/Westmeath/Roscommon are using face coverings.

On the Luas, morning and evening peak hour trams saw “the majority of customers wearing face coverings”, according to the NTA. Significantly, the NTA said the figures were “lower in the evening hours”.

Anne Graham, CEO of the National Transport Authority thanked those passengers who were wearing masks and said their use was “ vital for the increase in capacity to make sense from a public health point of view”.

Last Monday, capacity on buses, trains, and trams increased from 20 per cent to about 50 per cent.