Government to examine VAT cut as part of stimulus package 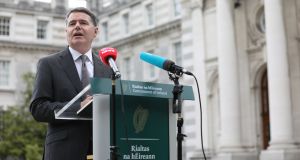 Minister for Finance Paschal Donohoe said the abrupt conclusion and termination of the wage subsidy scheme could have a significant effect on job retention in the country. Photograph: Julien Behal/ PA Wire

A cut in the 13.5 per cent VAT rate is being examined as part of the new Government’s July stimulus package to boost the economy after the coronavirus restrictions.

The Fianna Fáil-Fine Gael-Green Party coalition is expected to unveil the plan later this month, in what will be its first major act.

Consideration of what will be in the plan is “embryonic”, but well-placed sources said a reduction in VAT was being “examined”.

However, a reduction in the VAT rate of 13.5 per cent to 9 per cent, as was introduced in 2011 by the then Fine Gael-Labour government, is seen unlikely and any move this year will not be as “drastic”.

The initial VAT rate cut was brought in to help boost the tourism and hospitality sector but it was increased back to 13.5 per cent by Minister for Finance Paschal Donohoe in Budget 2019, with Mr Donohoe saying the measure had “done its job”.

Tourism and hospitality groups have called for another VAT cut to help the sector recover from the economic fallout of Covid-19.

Another issue to be examined as part of the July stimulus plan is the future of the wage subsidy scheme which sees the State contribute to the earnings of hundreds of thousands of workers.

Taoiseach Micheál Martin said it may be targeted or fine-tuned at specific sectors of the economy which most need it, with analysis required before changes are made. He said no one would be “falling off a cliff” when the scheme was concluded and the Government would invest in a “safe return to work” for all.

Mr Martin said the introduction of a number of Bills in July would focus on helping people get back to work and supporting small to medium sized companies, “the engine room of our economy”.

Mr Donohoe said: “I am very clear that the abrupt conclusion and termination of wage subsidy scheme could have a significant effect [on] job retention in our country. And that is something that the new Government wants to avoid.”

Mr O’Dea, the former minister for defence, said he was “bitterly disappointed for the people of Limerick that the third city of the Republic and economic driver of the midwest has been completely overlooked for either senior or junior ministerial appointments”.

“I have been inundated with messages from people who feel let down and grossly insulted. There are three Government TDs out of four in Limerick city, yet Micheál Martin has felt it appropriate to insult all the people of Limerick city with this decision.”

It follows Fianna Fáil whip Michael Moynihan accusing his leader of insulting him personally and of insulting his community by failing to give him a junior ministerial post.