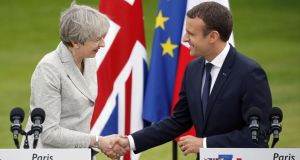 Receiving British prime minister Theresa May at the Élysée Palace in Paris on June 13th, French president Emmanuel Macron twice emphasised that he wants negotiations to get under way “as quickly as possible”. A year after the Brexit referendum vote, Paris is impatient with what French officials portray as British indecision, incompetence and dithering.

The contrast between the young, confident and dynamic Macron, who was about to win an absolute majority in the National Assembly, and May, who had just lost her absolute majority in parliament, spoke volumes about the balance of power in negotiations, even before her notes were blown by the wind from her lectern.

Michel Barnier, who is leading negotiations on behalf of the remaining 27 European Union members, and who is French, has repeatedly expressed frustration that three months of negotiating time were lost after May activated article 50 of the Lisbon treaty on March 29th.

“I need a British delegation, a stable, responsible head of delegation with a mandate,” Barnier told Le Monde newspaper. “We could start tomorrow . . . But I can’t start negotiating with myself.”

Le Monde reflected Barnier’s and official French exasperation in its June 15th editorial: “The EU cannot be left hanging forever due to British hesitation and tergiversation [equivocation] . . . The UK must confirm its decision, stick with it and leave. Fast.”

Macron is determined that Brexit not sidetrack his plans to relaunch Europe. “We don’t want to spend energy on discussing Brexit,” he said as he stood beside May. “We want to talk about the future within the euro zone.” Macron’s priorities are greater integration of the euro zone and strengthening defence co-operation.

Former president François Hollande made it clear from the beginning that the UK must not benefit from leaving, that it cannot be seen to be better off outside the union.

Paris does not share May’s ambition “to make Brexit a success,” because a successful Brexit could motivate other countries to leave.

“From the beginning, France was seen as the hardest partner to deal with on Brexit,” said a European diplomat. “Hollande’s language was interpreted to mean a punitive exit. People paraphrased it as: ‘They’ll pay for this. Make them suffer.’”

Though the Germans started “more softly, softly,” their attitude has come to resemble that of the French, the diplomat said. The German chancellor and Germany’s ambassador to Paris have recently alluded to British “illusions” about the terms of Brexit.

The excellent rapport between Macron and German chancellor Angela Merkel has given Europe’s “Franco-German motor” a new lease on life. “It fits into the broader picture of a weak May, a weak Trump and Macron and Merkel coming through the middle with the idea of a bright new future for Europe,” the diplomat said.

Although French officials regret the Brexit vote in public, “France is the country that thinks Brexit is not that bad, that we’ll get used to it and get on with it,” said Jean-Dominique Giuliani, chairman of the Robert Schuman Foundation. “Everyone, not just the French, thinks European construction will be easier without the British.”

Brexit has revived old French resentments. “The French have always been annoyed by the special status the UK enjoyed in Europe,” said Giuiliani. “They think the British had their cake and ate it too, that they had one foot in and one foot out, and a lot of advantages.”

On Bastille Day last year, then foreign minister Jean-Marc Ayrault said foreign secretary Boris Johnson had “lied a lot to the British” about Brexit. Johnson annoyed the French again in May, when he objected to “some of the language” surrounding the EU’s creation of an operational headquarters to oversee EU military training missions in Africa and the Balkans.

In his book Révolution, published before his election, Macron said the EU “gave in to [British] blackmail” in the February 2016 agreement that was meant to convince the British to stay in Europe.

May’s statement on March 29th that “a failure to reach agreement would mean our co-operation in the fight against crime and terrorism would be weakened” was also widely perceived in France as a kind of blackmail.

“The British are reticent about cooperating against terrorism,” Giuliani said. “They’d rather play James Bond than build European defence . . . When the attacks happened in France, we shared everything. But when London was attacked they preferred to share their intelligence with the Americans. Then Trump gave it to the Russians and they were kicking themselves.”

In his book, Macron expressed a second theme often heard in France: that the Brexit vote “is based on the rejection of a model of society that British leaders defended”. In other words, the UK pushed for an ever-larger EU market that promoted globalisation and unfair competition, to the detriment of closer social and political union.

There is also a widespread feeling that London underestimates the complexity of Brexit negotiations, of converting thousands of EU laws, negotiating bilateral versions of hundreds of trade and investment agreements and undoing 44 years of economic and political ties. A French official lamented that European experts in the foreign office had been sidelined by Brexit secretary David Davis.

May believes immigration was a leading factor in the Brexit vote. She has promised to reduce immigration from about 400,000 to 100,000 new entrants annually, Giuiliani noted.

It is not the least of Brexit ironies that the Touquet agreement, which moved the British border to Calais, is at risk in negotiations. “When the British thumb their nose at us and pick up and leave, obviously the Touquet accords will be in question,” Giuliani said. “They’ll have to defend their border in Dover, not Calais, at least that’s what Macron implied during the campaign.”

Contacts are under way for high level Brexit consultations between Dublin and Paris next month. Newly-appointed Minister for Foreign Affairs Simon Coveney may find that Paris will have to be one of his first ports of call. It is possible that Macron may call on Taoiseach Leo Varadkar.

As economy minister, Macron received Minister for Education Richard Bruton on St Patrick’s Day in 2015 and 2016. He and other high-ranking French officials are sympathetic to Irish concerns about the Border.

On the level of the general public, the Irish Embassy in Paris has undertaken what Ambassador Geraldine Byrne Nason calls “a huge pedagogical exercise” with French schools, media and politicians to correct “a little fuzziness” regarding Ireland’s relationship to the UK and its commitment to Europe. After the Brexit vote, it was not uncommon to hear French people ask if Ireland would also leave the EU.

“There has been huge receptivity and basic sympathy for our unique predicament,” Byrne Nason said. “The French welcome our assertion that we remain a fully constructive, active member of the EU 27.”

The French do not say that the Border must be re-established, only that “the integrity of the single market has to be protected”. An “invisible border” that would involve electronic surveillance and perhaps mobile patrols is one possibility. “Nobody wants a return to the past,” said a European diplomat. “The Germans also understand what walls and borders do to a society.”

“It would be absurd to set up a Border that revives the tensions we put behind us,” said Giuiliani. “The EU contributed a great deal of money to promoting understanding between communities in Northern Ireland. It’s one of the things Europe does best, and we are proud to have played a role.

“It’s lucky for Ireland that Michel Barnier is French,” Giuiliani continues. “He is very sensitive to the Irish question.” Barnier has made the “softest” possible Border one of his top priorities, on a level with the fate of British and non-British EU citizens living in each others’ countries, and determining the amount of the UK’s exit bill.