Dropped junior minister: ‘He said he had to reward his supporters’ 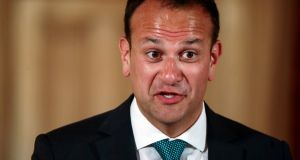 John Paul Phelan, a Varadkar supporter in the contest, has been made a junior minister in the Department of Housing, Planning and Local Government. He will have responsibility for electoral reform and local government.

Damien English, who was Simon Coveney’s campaign manager in the Fine Gael leadership race, will remain a junior minister in the same department with responsiblity for housing.

There are now three ministerial roles associated with the housing, including Eoghan Murphy, who was promoted to the senior ranks as Minister for Housing, Planning and Local Government in last week’s reshuffle.

David Stanton, who supported Mr Coveney’s leadership campaign, has also been retained as a junior minister.

However, Cork North Central’s Dara Murphy, a Coveney supporter, confirmed he has been dropped to the backbenches. Mr Murphy had served as Minister for European Affairs but said he was told of his demotion in an early morning phone call with Mr Varadkar.

“He said he had to reward his supporters,” Mr Murphy said.

Mr Murphy was Minister of State for Data Protection and European Affairs . Pat Breen has been given some of Mr Murphy’s responsibilities.

Mr Varadkar’s spokesman insisted all appointments were made on merit.

Ciarán Cannon is to become the minister for the diaspora, Andrew Doyle has been reappointed in the Department of Agriculture, while Meath East’s Helen McEntee has been appointed Minister for European Affairs. Minister of State for Gaeltacht Affairs Sean Kyne stays a junior minister, and it is understood Michael D’Arcy has also been appointed a junior minister in the Department of Finance.

Jim Daly has been given the mental health and older people portfolio, while Marcella Corcoran Kennedy, another supporter of Mr Coveney, has also been dropped. The Offaly TD was a junior minister in the Department of Health.

Ms Corcoran-Kennedy said she was “disappointed” to have been demoted adding that Mr Varadkar told her that he had supporters he needed to look after, but said she was expecting the news.

“Clearly they were going to have be represented somewhere,” she added, while saying she is initially disappointing on the level of female representation in Mr Varadkar’s Cabinet and junior ministerial ranks, although she is awaiting a final list.

The Cabinet is signing off on the jobs at its weekly meeting today. In all, five backbenchers are being promoted to junior minister posts.

The post of Minister of State comes with a €124,439 salary, a €34,474 boost on the TD’s salary of €89,965. Each Minister of State also receives a car and driver to assist with their duties, and allowance for an additional advisor.