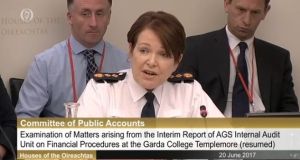 Nóirín O’Sullivan before the PAC on Tuesday. Photograph: Oireachtas.ie 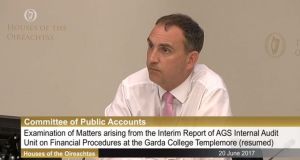 Garda Commissioner Nóirín O’Sullivan has confirmed tens of thousands of euro from European funds were held in a Garda bank account in Cabra, Dublin.

Ms O’Sullivan told the Public Accounts Committee she had been informed of potential criminal and fraudulent activity surrounding the use of EU monies given to An Garda Síochána to train individual members of the gardaí.

The Commissioner said the bank account was set up in 1999 and closed eleven years later in 2010.

However Ms O’Sullivan declined to answer questions on garda account but stated there was a number of signatories over the history of the account. The most recent was a retired senior Garda.

The Commissioner was unable to detail the rank of the person involved as she believed it would reveal their identity.

She insisted she was not seeking to protect any individual but believed everyone should be afforded due process.

The account predates her and Garda commissioner Martin Callinan’s time, she said.

The Irish Times has reported how monies from CEPOL, an EU-funded agency for training of individual members of gardaí, was forwarded to a bank account in Cabra linked to the home address of a retired Garda.

The head of the Garda internal audit unit Niall Kelly has conducted a report on the allegations and verbally briefed Ms O’Sullivan on the contents on Friday last.

A written report was requested, which was delivered to the Commissioner on Monday.

The Commissioner insisted this was the first she became aware of the allegations. She has since forwarded it to the Garda Síochána Ombudsman Commission for investigation and has made the Minister for Justice Charlie Flanagan, the Policing Authority and the European Anti-Fraud office aware of it.

The Commissioner was strongly criticised for forwarding the internal audit to Gsoc and was accused of trying to gag the Public Accounts Committee. Members alleged this was an attempt to prevent the committee from inquiring into the allegations of mismanagement of EU monies.

Fianna Fáil TD Marc MacSharry said it had been “very conveniently” forwarded to Gsoc the day before the Pac meeting, while Social Democrats TD Catherine Murphy said her actions had put the issue out of bounds of the committee.

Ms O’Sullivan denied these allegations insisting she referred the report to Gsoc “because that is the appropriate impartial and objective statutory body that is there to carry out examinations and investigations into any matters relating to serving or retired members of An Garda Síochána”.

Asked how serious the suspicions of fraud are, the Commissioner said she could not state.

This would be a matter for the Ombudsman commission to establish, Ms O’Sullivan said.

The Commissioner said she would make the report available to the Pac once she was in a position to do so.

The commissioner claimed the information contained in the internal audit was so significant it required immediate action.

Ms O’Sullivan said records will show the actions taken by her administration to regularise the financial irregularities at Templemore college.

This is a complex matter, she stressed insisting it takes time to unravel this complex structure.

The commissioner is in dispute with the head of human resources John Barrett about when she became aware of the mismanagement at the college.

Speaking at the committee, she stressed she first learned of them on July 27th 2015 at a meeting in the college.

The commissioner informed Minister for Justice Charlie Flanagan of potential fraudulent abuse of EU funds at the college.

In a letter to the PAC Ms O’Sullivan said she had done so under Section 41 of the Garda Síochána Act.

The commissioner confirmed the issue has also been sent to the Comptroller and Auditor General and the European Anti Fraud office.

Ahead of the PAC hearing, committee chairman Sean Fleming said: “The matter has been swept under the carpet long enough.

“This is the first time that the gardaí are saying there is a suspicion of fraudulent activity in Templemore,” he told RTÉ’s Morning Ireland.

Mr Fleming said that there was a suggestion that the figure in the account could be €100,000 or more. “If the PAC had not pursued this, would it have come to light?”

He said that the PAC questioning will focus on how cheques written in Templemore ended up in a bank account in Cabra and where it went from there. “How were these funds used?”

Mr Fleming expressed concern that two years was too long for this matter to be ongoing.

He described the Police Authority as similar to board of directors and asked “what have they done about it?”

“They should be more proactive, we want to see decisive action.

“Any other organisation would have gotten to the bottom of this by now.”