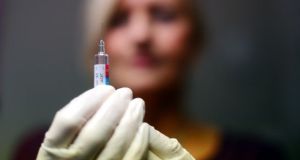 A vaccine jab that prevents heart attacks could become a reality after promising early research showing how the immune system can be directed to lower cholesterol.

Patients have already been enrolled into a phase 1 trial to see if the approach, so far tested on mice, will work in humans.

In future, a cholesterol-lowering vaccine could theoretically provide a more effective and reliable alternative to statin drugs.

The vaccine, known as AT04A, triggers the production of antibodies that target an enzyme involved in regulating levels of blood cholesterol.

The enzyme, PCSK9, has been shown to impede the clearance of low-density lipoprotein — the “bad” form of cholesterol that is largely to blame for blocked arteries — from the blood.

In tests, mice fed an unhealthy Western-style fatty diet had their total blood cholesterol lowered by 53 per cent by the vaccine.

Atherosclerotic damage, the build-up of hard fibrous deposits on the walls of arteries, was reduced by 64 per cent and biological markers of blood vessel inflammation by up to 28 per cent compared with unvaccinated mice.

The new results, published in the European Heart Journal, open up the prospect of a yearly vaccine jab to keep cholesterol under control in at-risk patients.

Researcher Dr Gunther Staffler, chief technology officer at the Austrian biotech company AFFiRis, which developed the vaccine, said: “AT04A was able to induce antibodies that specifically targeted the enzyme PCSK9 throughout the study period in the circulation of the treated mice. As a consequence, levels of cholesterol were reduced in a consistent and long-lasting way, resulting in a reduction of fatty deposits in the arteries and atherosclerotic damage, as well as reduced arterial wall inflammation.

“If these findings translate successfully into humans, this could mean that, as the induced antibodies persist for months after a vaccination, we could develop a long-lasting therapy that, after the first vaccination, just needs an annual booster. This would result in an effective and more convenient treatment for patients, as well as higher patient compliance.”

Essentially the vaccine is an immunotherapy treatment. Unlike a conventional vaccine that targets foreign invaders such as bacteria and viruses, AT04A marshals the immune system to attack one of the body’s own proteins.

A Phase I trial testing the safety and activity of the vaccine in 72 healthy patients was launched at the Medical University of Vienna in 2015. The trial is due to finish at the end of this year.

However, before the vaccine can be licensed and rolled out to patients, larger scale trials focusing on effectiveness as well as safety will have to be carried out.

British expert Dr Tim Chico, reader in cardiovascular medicine at the University of Sheffield, said: “If similar effects were achieved in humans it would be likely to lead to a reduction in heart attacks.

“The theory is sound and I think this might have the potential to replace the need to take regular cholesterol-lowering drugs.”

He said it may take “many years” to be certain about the long-term safety of the vaccine, which unlike a drug could produce permanent side effects.