Long and slow Brexit likely as Theresa May clings to power 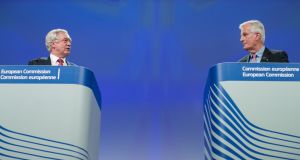 At 7am on Friday, June 23rd last year, as the last votes in the EU referendum were being counted and the pound collapsed on currency markets, David Cameron turned to his closest aides in Downing Street.

“Well, that didn’t go according to plan,” he said.

Theresa May might have said the same thing on June 9th this year, when it became clear that her gamble on an early election had misfired dramatically, robbing the Conservatives of their slender majority in parliament. The prime minister had framed the election as a referendum on her leadership of the negotiations to take Britain out of the EU, claiming that she needed a bigger majority to strengthen her hand in Brussels.

The election has left May clinging to office at the head of a cabinet she treated with disdain for months but which is now more powerful than she is. The prime minister has thrown herself on the mercy of Conservative backbenchers, telling them she will serve “as long as you want me”. Part of the price of May’s survival has been the loss of her two closest aides, Nick Timothy and Fiona Hill, who resigned after the election.

The prime minister failed to win a popular mandate for her Brexit strategy and Conservative advocates of a softer exit believe the election has strengthened their hand. But each time a cabinet minister hints at a change of strategy, May insists that nothing has changed since the election and that the government’s objectives in the negotiations with the EU are the same as before.

The strategy was set out formally in May’s Lancaster House speech in January, a government white paper and a letter to European Council president Donald Tusk in March. But the direction was set in a few lines in the prime minister’s speech to the Conservative Party conference in Manchester last October.

By prioritising immigration control and ruling out any future role for the European court, May set Britain on a path to a hard Brexit, leaving the single market and the customs union. No member of her cabinet has deviated from this position since the election but in a speech in London on June 20th, chancellor of the exchequer Philip Hammond hinted at a softer approach.

He sought to reassure businesses that, although Britain wants to “manage” migration after Brexit, it does not wish to shut it down and the health of the economy should come first.

“When the British people voted last June, they did not vote to become poorer, or less secure. They did vote to leave the EU. And we will leave the EU. But it must be done in a way that works for Britain. In a way that prioritises British jobs, and underpins Britain’s prosperity,” he said.

He also suggested that, although Britain would seek to negotiate a new customs agreement with the EU, current arrangements are likely to continue for a transitional period lasting a number of years.

Hammond is the most powerful figure in the cabinet and his views on Brexit are shared by other senior ministers, including home secretary Amber Rudd. But even if the prime minister wanted to change course on Brexit, any attempt to do so would face formidable opposition within her party.

Since the election, May’s loudest defenders have been the hardest of Brexiteers, including Iain Duncan Smith and international trade secretary Liam Fox. She has the support of a powerful caucus of pro-Brexit MPs led by Steve Baker, whom she has just made a Brexit minister. These MPs will turn on May the moment she appears to backslide on core elements of their Brexit plan, especially controlling immigration and ending the jurisdiction of the European Court of Justice.

The government’s Brexit strategy has been complicated by structural weaknesses in Whitehall, partly the result of May’s decision to create a Department for Exiting the European Union (Dexeu) under David Davis. This decision, which many officials now believe was a mistake, added an extra bureaucratic layer to decision-making and complicating established systems of communication between departments.

It also reinforced May’s centralising approach to government, which involved many decisions being funnelled through Timothy and Hill to the prime minister. Now that the two advisers have left, officials are struggling two work out some of the details of the Brexit plan.

“The problem is that a lot of it was in Nick’s head,” one official said.

Throughout the past year, Britain’s civil servants have undertaken a massive research project, mapping in detail the implications of Brexit for every region and economic sector. They have given their political masters voluminous, high-quality information about every aspect of leaving the EU. Unfortunately, the politicians have ignored most of it.

This is why Britain appeared so ill-prepared ahead of the start of negotiations, apparently unfamiliar with the detail on some of the first items on the negotiating agenda. There was, for example, a complete failure to grasp the complexity of granting rights to EU nationals living in Britain.

Until recently, British government ministers and Brexiteer MPs suggested that, although they wanted to guarantee EU citizens’ rights, the EU negotiating side was dragging its feet. Then the EU published a detailed analysis of the rights currently enjoyed by EU citizens in the UK, demanding that they should be maintained in full after Brexit.

These include rights which are actually superior to those enjoyed by British citizens, when it comes to marrying a citizen from a country outside the EU.

If a softer Brexit is unlikely to be imposed by the cabinet or by Whitehall, it could be facilitated by the new arithmetic in Parliament. Although more than 80 per cent of voters in the recent election backed the Conservatives and Labour, both of which are committed to leaving the EU, there is no majority in the House of Commons for May’s hard Brexit. And polls since the election indicate a loss of popular support for the prime minister’s approach.

Over the next, two-year legislative session, the government will need to introduce up to a dozen pieces of Brexit-related legislation. These include bills on issues such as immigration and customs as well as the Great Repeal Bill, which repeals the 1972 European Communities Act and transposes all EU rules into British law.

The precedents of the hung parliament between 1974 and 1979 and John Major’s skirmishes with eurosceptic rebels in the 1990s suggest that MPs are reluctant to rebel on substantive votes. They are much more unpredictable, however, when it comes to procedural matters such as the timetabling of legislation.

Britain’s changed political landscape since the election may not produce the soft Brexit that many Remainers are hoping for. But the new parliamentary arithmetic and a shift of power within the cabinet could move Britain towards a slow Brexit, where the goal of splendid isolation remains the same but the route becomes longer and the pace more leisurely.

4 ‘I’m the meme queen’: A QAnon digital soldier marches on