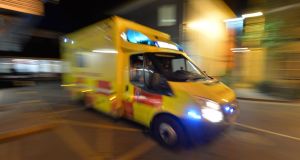 According to department figures, 772,856 genuine calls were made for emergency services requests in 2016. File photograph: Alan Betson/The Irish Times

More than half of the calls made to the emergency services last year were not related to emergencies, according to figures from the Department of Communications.

In total, 1.7 million calls were made to the emergency services call-line last year, but less than half of these were logged as normal calls and directed to gardaí or fire, ambulance, Coast Guard, and mountain rescue services.

According to department figures, 772,856 genuine calls were made for emergency services requests in 2016.

A percentage of calls also included misdials, requests for non-emergency services, and abusive callers. These calls together made up 169,077 of 999 and 112 calls last year.

Michael Dixon, national chairman of the National Ambulance Service Representative Association (Nasra), said the organisation was “concerned, but not surprised” at the number of hoax and non-emergency calls to the emergency services.

“The public needs to be aware of the consequences for emergency services responding to hoax call-outs.

“It diverts services away from genuine emergencies and can even put crews in danger if services are dispatched in response to hoax calls,” Mr Dixon said.

“There needs to be more serious sanctions on anyone abusing the emergency call-out numbers and initiators of hoax and nuisance calls, and their parents and guardians where children are involved,” he added.

When a person calls 999 or 112, they are directed to the emergency call answering service, where staff attempt to identify the nature of the caller’s emergency and then transfer them to the relevant service.

The number of calls to the emergency services line has declined over the last five years, according to the department’s figures.

In 2011, just 30 per cent of calls to the emergency services line were recorded as genuine calls.

Ireland’s emergency call service has one of the quickest response times in Europe, according to EU statistics.