Fintan O’Toole: This visit feels too much like a ceremonial procession 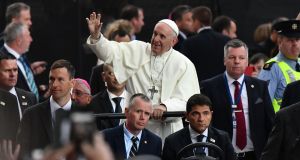 Early mediaeval bishops used to sign their communications with the formula “peccator episcopus” – sinner and bishop. Pope Francis came to Ireland in a somewhat similar mood. His quietly rueful demeanour could hardly present a starker contrast to the radiant charisma and supreme self-confidence of his predecessor John Paul II in 1979. But “peccator episcopus” is a hard trick to pull off when you happen to be bishop of Rome. However much Francis may wish to have come among us as a humble sinner, he cannot escape the reality that he heads an institution that is struggling to fully confess its sins, let alone do penance for them.

Francis is not a pompous man, but pomp and ceremony come with the job. If it’s your job to be driven down O’Connell Street in a transparent vehicle bestowing blessings on all and sundry, it is not easy to be what Francis surely is: a decent man struggling to articulate the “shame, pain and outrage” he says he feels for his church’s systematic covering-up of child abuse. The crowds may be modest and the atmosphere low key. But the papacy can’t quite shake off its heritage as the successor to the Roman empire and even Francis can’t entirely avoid seeming like an emperor on tour to a far-flung province.

Thus, on the one hand, he can seem genuinely at ease among so-called ordinary people in the Capuchin day centre and Sean McDermott Street. And he was probably just as much at ease with President Michael D Higgins, whose passions for social justice and environmental sustainability he shares. If his visit were not so bafflingly short and he had taken the time to do what he does best – spend time with people who are marginalised and suffering – he might really have made a difference. He might have revivified the sense of Christianity as a radical option for the poor as opposed to a form of institutional power. But this visit feels too much like a ceremonial procession with a pastoral purpose added in as an afterthought for that to be possible.

And on the other hand, for all his obvious sympathy with suffering, Francis still failed to rise to the obvious need to embody a church that is genuinely shocked at its own deep moral failings. It was a truly woeful idea for Francis to seek to provide reassurance by suggesting as the gold standard of contrition the open letter his predecessor Pope Benedict sent to Irish Catholics in 2010: “His frank and decisive intervention continues to serve as an incentive for the efforts of the Church’s leadership both to remedy past mistakes and to adopt stringent norms meant to ensure that they do not happen again.”

It is hard to understand how Francis imagined that stressing the continuity of the church’s response to child abuse was a good idea when a radical break with the past is so obviously necessary. If Benedict’s response to the crisis was “frank and decisive”, how come the hidden truths are continuing to emerge? How come no independent observers, or indeed most of the Irish bishops, believe that Benedict’s actions were even vaguely adequate, let alone decisive?

Usually, when someone comes to visit, you get to know them better. But Francis seems even more enigmatic for his presence among us. How can someone have such a warm human touch on the one hand and be so terribly out of touch on the other? How can he be so deeply sympathetic to human suffering and so apparently unable to do the things that would stop it? It is as hard not to warm to him as it is to figure out how his humble humanity sits with his aura of divine power.