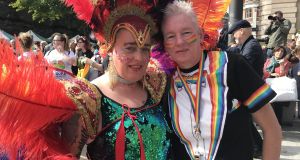 Fifty years after it was first raised, a civil rights banner has led several thousand marchers through the streets of Derry for the city’s annual Pride parade.

“We’re here to say LBGT rights are just as much part of civil rights as those marched for 50 years ago,” said veteran civil rights campaigner Michael Farrell.

“We’re out on the streets today just asking for civil rights.”

The march on Saturday is the culmination of the week-long Foyle Pride Festival - which aims to acknowledge, empower and celebrate the LGBT community.

It also marks the 25th anniversary of Pride celebrations in Derry.

This year’s march - which was led by Mr Farrell and others who were prominent in the civil rights movement, including Bernadette McAliskey and Eamonn McCann - commemorated the 50th anniversary of Northern Ireland’s first civil rights marches.

Derry’s Pride parade has traditionally followed the route which civil rights marchers had planned to take on 5th October 1968 until they were stopped and attacked by police on Duke Street.

The marchers were welcomed with whistles, cheering and applause as they made their way through the city’s walls and into Guildhall Square.

Behind them came thousands of people - and even a few pets - dressed in colourful costumes and waving rainbow flags.

Among the many banners carried were those representing trade unions and political parties, and calling for the introduction of marriage equality.

Same-sex marriage remains illegal in Northern Ireland. Before the Stormont Assembly collapsed in January 2017 five motions had been brought forward calling for marriage equality for same-sex couples; the most recent of those was vetoed by the Democratic Unionist Party (DUP) using the petition of concern blocking mechanism.

Also in attendance were representatives from the North’s Ambulance Service and the Police Service of Northern Ireland (PSNI), who had brought along a rainbow-decorated Landrover with the slogan “hate crime is unacceptable”.

Dressed up in a rainbow-coloured headdress was Tracy Best, who travelled to the parade from Limavady, Co Derry, with her wife Sharon Oliver.

They got married in a civil partnership last year and say that while they’re “happy the way we are”, they believe restrictions on gay marriage in Northern Ireland should be removed.

“They [THE DUP]have the cheek to say to people, marriage is between one man and one woman, when even the Bible doesn’t say that,” said Tracy.

“Some people do want to get married. There should be equality for everybody,” she added.

Mr Farrell - who was among those who took part in the Duke Street march in 1968 - said it was “extraordinary” to return to Derry to such a welcome.

“We never got out of Duke Street, because we were beaten off the street by the police. It’s great to be here and great to see the changes that have come, though of course change has been quicker in the South,” he said.

“To see this march welcomed, and for the population to be really open to LGBT people, that’s a huge change in my lifetime - a huge change for the better.”