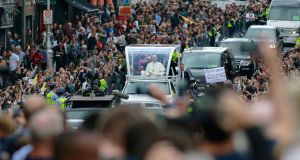 Tens of thousands of people lined the streets of Dublin on Saturday afternoon to catch a glimpse of Pope Francis as he made his way across the city in his popemobile.

Starting out at St Mary’s Pro-Cathedral in Marlborough Steet and travelling at a fair old clip the papal drive-by went down O’Connell Street, over O’Connell Bridge, down Westmorland Street and up Dame Street en route to the Capuchin Day Centre in Smithfield where he met homeless families.

An hour before his scheduled tour of city streets, the crowd along some portions of the route was patchy but it had swelled significantly by the time the famous white vehicle took off.

Flags from Ireland, Brazil, Argentina and Italy were draped across crash barriers while one rainbow banner fluttered in the breeze from a third-story window of the Dublin wax museum.

There were a large number of families in the crowd many of whom were wearing Pope Francis t-shirts and waving flags and banners bought from enterprising street hawkers who had fanned out across the city.

There were also a smattering of protesters but a significantly larger portion of the crowd appeared to be made up of accidental pope watchers who had come into the city centre to shop or drink before deciding to hang around for the spectacle.

Shortly before 4.30pm the spectacle started when the pope’s motorcade appeared and a wave of clapping ripples through the crowd began. Many commented on the speed at which the motorcade travelled through the city centre.

“I wanted to come to see the man in the flesh,” said Michael Walsh from Kilkenny. “Our daughter is 10 years old and I was hoping that she would get a blessing and I think it’s good to support this pope,” he said.

Lucia Banjo from England said it had been “cool” to see Pope Francis pass just a few meters from where she was standing although she admitted she had not come into the city or even the country to see him. “I came in to do some shopping and then I saw the pope was going to be in town so I thought I’d hang around and have a look. I am glad I was looking for a pair of trainers now,” she said.

By contrast Chris Novak from South Carolina had made it his business to be in town for this event. “We always take two weeks in Ireland every summer and we made sure to time it for the papal visit,” he said. “0ur kids have missed a whole week of school back home for this.”

He and his family had travelled to Knock earlier in the week and were heading to Croke Park on Saturday evening for a World Meeting of Families event and on to the Phoenix Park on Sunday for a papal mass at 3pm.

“I think the church needs to deal with all the abuse scandals and it needs to become more proactive rather than reactive,” he said.

Carys Roderick was in town on her hen party and while she is planning to get married in a church in November she said her faith was not at all strong. “We were waiting a good hour before he passed,” she said dancing from side to side in a bright yellow chicken costume. “I even stood on a bollard to get a good view.”

The pope initially used the Skoda car he had been transported in earlier, before transferring to a white popemobile outside Our Lady of Lourdes Church on Sean McDermott Street.

He stopped for a brief meet and greet with well-wishers, shaking hands with flag-waving supporters and kissing children.

During his 1979 visit to Ireland, Pope John Paul II had planned to stop on the street to visit Matt Talbot’s tomb in Our Lady of Lourdes church. However, the popemobile was running behind schedule and drove on, much to the disappointment of many local people. Some said afterwards joyriders did not go down Seán McDermott Street as fast.

Pat Collins was among those who waited on Sean McDermott Street in 1979 in the hope of catching a glimpse of Pope John Paul II.

On Saturday, Mrs Collins was back in Dublin with her sons Lawrence, Noel and Brendan, grandchildren and extended family.

“It’s great to be back after 40 years to see Pope Francis come here,” Mrs Collins said.

“In 1979 there were benches lined along the street and we all sat here waiting for Pope John Paul II as we were expecting him to stop, but he didn’t.

“I have been to Rome twice and never got a glimpse of him.

“But it’s far better to see him here at home. It means the world to me, my boys and my grand kids.”

Her son Noel was just six when he travelled with his mother to see Pope John Paul II in Dublin in 1979.

He returned on Saturday with his six-year-old daughter Tilly and three-year-old son Joseph.

Alan Ramsay from Dublin was also among the excited crowds.

He predicts that a lot of babies born in Ireland over the next few years will be named after the pope.

“After the last visit, you had a lot of babies called John Paul. This is even better because you can call boys Francis, and girls Frances,” he said.

“I was born on the flats on Sean McDermott Street right beside where he is visiting. It’s happy days and I hope the weather keeps up for us.”

Co Tyrone-born nun Sr Maire McAleer was among those who had travelled from Belfast to see the Pope.

She is a member of the Adoration Sisters based on the Falls Road.

“I saw Pope John Paul twice and Pope Benedict once,” she said.

“He (Pope Francis) is a wonderful man.

“We have to remember this event is the World Meeting of Families, it’s not just a visit to us, it is a privilege for us to host and to host so many people.”

After Sean McDermott Stret the pope took a short trip to St Mary’s Pro-Cathedral.The procession of cars swept past the green door of the last Magdalene laundry which closed its door in 1996.

Will Hamilton threw a pair of baby shoes on the road in front of the pontiff’s car.

He is part of the Baby Shoes Remember campaign which wants to see a day each year dedicated to victims and survivors of clerical abuse.

“I threw the baby shoes into the middle of the road, but a Garda picked them up and threw them away,” he said.

“They are laced with black ribbon, mourning ribbon, and they are a symbol to unite all the protests against the pope.

A number of the laced baby shoes are set to be displayed at the Garden of Remembrance in Dublin on Sunday as the pope begins mass at the Phoenix Park at around 3pm.

Mr Hamilton said there will also be baby shoes displayed in solidarity in a number of cities and towns across Ireland, as well as internationally.