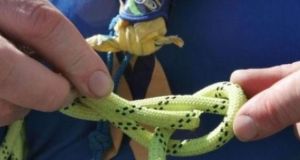 The complainant alleges he was sexually assaulted when he was a member of the Catholic Boy Scouts of Ireland in the 1980s.

Gardaí in Cork are to prepare a file for the DPP after releasing without charge a former scout leader who was arrested for questioning about sexually assaulting a young boy in the 1980s.

Detectives arrested the man, who is in his early 70s, shortly after 8am on Monday for questioning after they received a complaint that he sexually assaulted a young boy over 30 years ago.

The complainant, who is now in his early 40s, made a formal statement to gardaí alleging the man abused him over six year period beginning in 1983 when he was just seven and continuing until 1989.

The boy was a member of his local troop of the Catholic Boy Scouts of Ireland and he has alleged that he was sexually assaulted by the scout leader when he was invited to his house to discuss scouting matters.

The man was arrested under Section 4 of the Criminal Justice Act which allowed gardaí detain him for up to 24 hours.

The man, who is now retired from the scouts, was released without charge shortly before 7pm and gardaí will now prepare a file on the matter for the DPP, a garda spokesman confirmed.

The arrest comes just a week after Minister for Children Katherine Zappone revealed details of an internal review of child protection measures in Scouting Ireland, which was formed in 2004 following the merger of the Catholic Boy Scouts of Ireland and the Scout Association of Ireland.

Child protection expert Ian Elliott was commissioned last year by Scouting Ireland to carry out the audit and he identified 108 historic cases of alleged child sex abuse and 71 alleged abusers.

However, Mr Elliott told an Oireachtas Committee on Children and Youth Affairs that he expected the number of known victims to increase “quite considerably” as the review of past records was still ongoing.

Abuse victims were contacting the organisation at an “increasing” rate, said Mr Elliott, adding most cases related to incidents between the 1960s and 1980s, and the majority of alleged abusers were deceased.