Leo Varadkar: ‘The alternative to this deal is a no-deal Brexit’ 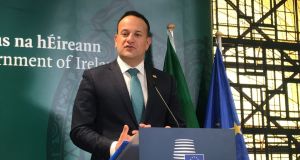 The alternative to the withdrawal treaty between the EU and the UK formally signed off in Brussels on Sunday is “no-deal and a cliff-edge Brexit”, Taoiseach Leo Varadkar said after the conclusion of the summit.

“It’s going to become more and more obvious that the alternative to this deal is a no-deal scenario,” Mr Varadkar told reporters after EU leaders emerged from the EU Council meeting which approved the text of the withdrawal treaty.

Echoing other EU leaders, Mr Varadkar said that the withdrawal treaty is the “only deal that’s on the table”.

“I hear a lot of people talking about better deals and alternative deals. And anyone can have a better deal or an alternative deal in their own minds, but an agreement – 500 pages long, that 28 member states can sign up to – nobody has that,” he said.

EU leaders were determined to convey the “this deal or no deal” message after a relatively perfunctory summit meeting which concluded after about two hours on Sunday morning, while British prime minister Theresa May also stressed that the current treaty was the best outcome that the UK could expect.

Nevertheless, senior sources in both Brussels and the Irish Government acknowledged that the prospects of Ms May securing the acceptance of the British parliament for the treaty – at least on its first vote – were slim.

Asked if he was ruling out any change to the exit mechanism from the backstop, which has emerged as a significant issue in London, Mr Varadkar replied: “I am, and it’s not just me, it’s the entire European Union today was very much of the view there couldn’t be a renegotiation.”

Mr Varadkar said the “core difficulty” among those arguing for a better deal for the UK was that they “don’t agree among themselves” what a better deal could look like.

“So really what’s being put before the European Parliament and the House of Commons is a deal. Any other deal really only exists in people’s imaginations,” Mr Varadkar said.

Mr Varadkar said that he understood the position of the DUP, which held its conference in Belfast on Saturday, but he would “posit a counterview”.

He said that the deal agreed between the UK and the EU was “very much in line with the principles of the Good Friday Agreement”.

He stressed everyone accepted Northern Ireland was and would remain part of the UK until such time as the people of Northern Ireland might vote otherwise, but that because of its “unique history and unique geography” it had special arrangements “that on occasion make it a little different from the rest of the UK”.

Citing examples in agriculture, energy, corporation tax, human rights issues and “issues of personal liberty like marriage equality and a woman’s right to choose”, Mr Varadkar said that he didn’t think that “having a special arrangement relating to market regulations on industrial goods is fundamentally different from the special arrangements that exist already”.

But, speaking at the DUP conference, MP Sammy Wilson accused the Government of “intransigence” and “not acting in good faith”.

Mr Wilson told The Irish Times that once the economic implications of the proposed agreement being rejected by the UK parliament become clear, the EU and Irish Government “will be scurrying back wanting to get a deal done”.

He argued that the Irish economy would be worst hit in a no-deal scenario where Irish beef, dairy and other agri-food exports to the UK would be hit with high World Trade Organisation tariffs.

“We could get beef cheaper from Brazil than we could get from Ireland, so if Irish farmers want their government to ruin their agricultural economy, that is an issue which will have to be dealt with in the Irish Republic,” he said.

Ian Paisley jnr, another DUP MP, said technical solutions, including trusted trader schemes and tax gathering/sharing arrangements, should be put “to the forefront of negotiations” to find an acceptable alternative to maintain an invisible border.

“If I was the Irish Government, I would be trying to explain to my traders in the south of Ireland why they are not working so hard on a real trade deal,” he said.

The DUP, which is keeping Ms May’s minority Conservative government in power at Westminster, is pushing for alternatives to the backstop in the legally binding Brexit treaty.

Man in court charged over firework incident at anti-lockdown protest 17:42
Colder than average winter officially over, Met Éireann says 17:44
Seanad voting rights case asked: ‘Is there a constitution in the world without oddities?’ 17:37
Covid-19 outbreaks among third-level students jump 20-fold in a week 17:35
Alien species and biodiversity projects to benefit from €1.35m 17:26