Storm Diana: Heavy rain and strong winds due on Tuesday 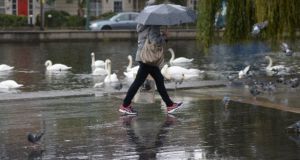 Ireland is bracing itself for up to a week of bad weather as the remnants of Storm Diana brings heavy rain and wind across the country.

Heavy rain is forecast across the south from the early hours of Tuesday morning and will last until 2pm on Tuesday at the earliest. It will herald bad weather which might last until this weekend.

Met Éireann says parts of the south of the country will receive up to 30mm on rain on Tuesday night. The heaviest rain will in the southern counties of Cork, Kerry and Waterford.

Southeasterly winds will strengthen on Monday night and during Tuesday, reaching mean speeds of 50-60km/h and gusts of 90-100km/h.

The forecaster issued two status yellow alerts. The first is a rainfall warning affecting Munster, Dublin Carlow, Kilkenny Wexford, Galway and Mayo. It is valid between 2am and 2pm on Tuesday.

Met Éireann forecaster Vincent O’Shea said there could be “damaging gusts” of up to 100 km/h on southern and south-eastern coasts, and that the yellow warning could be upgraded to an orange warning.

“All areas will get a spell of heavy rain and strong winds on Tuesday,” he said. “Everything is coming from the south-west. The very heaviest rain will be in the places with the strongest winds which will be typically all of Munster, Wexford and Galway,” he said.

“There will be a brief lull on Tuesday afternoon, but it looks like there will be another batch of rain and heavy winds on Tuesday night and Wednesday morning. Wednesday is looking very stormy. All areas will get bad weather.”

Storm Diana, named by the IPMA Portuguese weather service, is currently threatening the Azores and is due to make itself felt over western parts of Ireland and the UK on Wednesday.

On the same day, according to Met Éireann, the storm will approach Ireland, though it will have lost its marked intensity by then. It predicted wet, windy and unsettled conditions in the coming days.

Forecasters in the UK are predicting a harsher change in conditions as a result of Storm Diana. Dan Harris, deputy chief meteorologist at the Met Office, said: “It now looks very likely that we will see a major change in the UK’s weather early in the week ahead.

“We expect spells of wet and windy weather to sweep across the UK from the south west from Tuesday, although at the moment there is uncertainty around the timing and the focus for the heaviest rain and strong winds by Wednesday as Storm Diana approaches our shores.”

Gales of up to 96.5km/h could be seen over western parts of the UK, with heavy rain, although the storm is expected to move through relatively quickly.–Additional reporting: PA