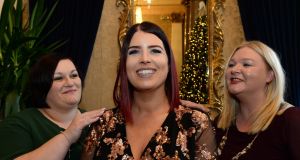 Brenda O Connell Barry (centre) at the Westin Hotel, Dublin, where she was named Careplus Carer of the Year. Photograph: Cyril Byrne

Friday was a momentous day for Brenda O’Connell Barry. She won the Careplus Carer of the Year award and will appear on the Late Late Show tonight.

It was also the first day she spent away from her four-year-old son Fionn who has a condition so rare that he is the only person in Europe who suffers from it.

Mrs O’Connell Barry (37), who is from Charleville, Co Cork, and her husband Trevor are the sole carers for Fionn who has NACC1, a rare genetic mutational condition.

He became extremely ill at three months and spent the first two years of his life in and out of hospital.

“I have to lift him and pull him. I could be in tears with my back,” said Mrs O’Connell Barry, who has been named as both Cork and the overall Careplus Carer of the Year for 2018.

She said the award will mitigate somewhat the feeling of aloneness she and her husband experience in looking after Fionn, who needs round-the-clock care.

“We feel there’s no one to turn to, there’s no support. Any bit of support that we have gotten, we have fought tooth and nail for it,” she said.

“On the days when Fionn is bad, and the screaming is just relentless, you can sit down in the chair and say, ‘dear God, what is the plan behind letting the little kids suffer?’ Why can’t some doctor come up with something to ease the suffering? We just want him to be happy and comfortable and to ease the pain.”

She said she was “literally on my hands and knees” when she finally got some support. “It shouldn’t be that hard,” she said.

Compounding her distress is the fact that her mother recently had a cancer diagnosis though thankfully the prognosis is good.

Mrs O’Connell Barry was presented with her award at the National Careplus Carer of the Year awards held in the Westin Hotel, Dublin.

She said the win was “huge” and a recognition that she and her husband had put their “hearts and souls” into looking after their son.

In her acceptance speech, she criticised the lack of supports, saying that at one stage she was on the verge of a nervous breakdown.

Fionn has not had physiotherapy or early interventions since before the summer holiday and she and her husband pay privately for help.

The couple have fundraised more than €50,000 to build a bungalow extension for their son. Previously the couple had only one bedroom in their home and they had to share the couch on occasions.

There were 27 county award winners – including north and south Dublin – and four regional young carers.

The Meath Careplus Carer of the Year was Darryl Fitzgerald (28) who looks after his grandmother, Nancy Darcy, full time. He had previously cared for his grandfather.

He was nominated by his mother Sandra. When asked why he did it, he responded: “Love. Love for my grandparents.”

Shauna Tighe (14) won the young carer for the year for the Dublin area. She helps to care for her brother Daniel (11) who has a rare genetic condition called Sotos syndrome. This condition causes severe intellectual disability, epilepsy and a sensory processing disorder.

Her mother Sinead described her daughter’s support as vital. “It’s sad to say that you have to use your eldest child to help you out. Dan has quite challenging behaviour and he’s hard to manage. Shauna is the best person to calm him down,” she said.

Cervical campaigner Stephen Teap wins Cork Person of the Year Award 19:16
Driver may have travelled 22km with explosive device attached to car 19:08
Destitute in Dublin: ‘You are vulnerable in a tent. Nowhere is safe’ 18:43
Dublin homes within walking distance of park are worth more, conference told 18:08
Man who denies murdering he father says he was his mate 18:07