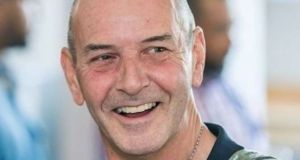 A man has appeared at Cape Town magistrate’s court charged with the murder of Dubliner John Curran, who was found stabbed to death at his apartment in the city centre.

Mitspa Mzakomba Onyoka (24), a Congolese national with an address at Riebeek Street, Cape Town, was remanded in custody until December 3rd to allow investigating officers ascertain the veracity of the details he is providing at his forthcoming bail application.

Mr Onyoka, who was dressed in a black T-shirt, shorts, and flip flops, was arrested on Friday night by investigating police officers. He spent the weekend in a remand cell at Cape Town Central Police Station, and appeared in court for the first time on Monday morning.

According to state prosecutor Adiel Jansen, Mr Onyoka had been arraigned on charges of murder and aggravated robbery following his arrest.

Mr Curran, a former teacher who had just finished working in Cape Town as the director of education for Irish charity Mellon Educate, was found dead in his apartment on the morning of November 7th last.

Results of a postmortem revealed he was hit over the head with a blunt instrument before being stabbed to death.

Police spokesman Capt Ezra October has confirmed a blunt instrument and knife were found at the scene.

Earlier this month, the police circulated CCTV images from Mr Curran’s apartment block on Buitengracht Street of a person of interest as part of a public appeal for information to trace his whereabouts.

Capt October initially said the only thing taken in the attack was Mr Curran’s phone. However, during the brief court hearing Mr Jansen referred to a number of items as having been stolen during the incident.

Mr Jansen said that in addition to verifying Mr Onyoka’s bail information, the state wanted to see if there were any outstanding warrants against him.

Investigating officers will also take a blood sample from Mr Onyoka for the purposes of gathering DNA evidence, he added.

Mr Onyoka, who was granted free legal aid, will appear in court next Monday when his bail application will be heard by magistrate Craig Jacobs.