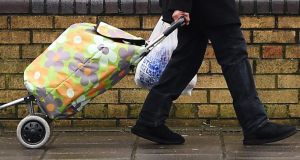 Since 2016, funds totalling almost €2.2m have been approved to pay for cots, buggies and other child-related items, and almost €1.2m to assist with household bills. Photograph: Andy Rain

The cost of providing exceptional payments for items like bedding, household items and furniture for social welfare recipients has risen by almost 70 per cent since 2016.

Figures released for exceptional needs payments (ENP) by the Department of Social Protection show that more than €27.5 million was approved for housing-related items last year, compared to €16.3 million in 2016.

The payments are made following an application by someone who it is deemed cannot be reasonably expected to meet the cost for a particular item out of their weekly income.

Housing payments cover a range of categories, including rent deposits, furniture and household appliances. However, the largest housing-related items by a significant factor relate to the kit-out of new social housing units, which are provided unfurnished.

Some €18.2 million was approved to fit out units where the incoming social housing tenant could not afford to furnish the property from their own resources.

Housing-related payments are by some distance the largest of the exceptional needs payments approved by the department, accounting for more than 63 per cent of the total budget.

The State stepped in to pay some €1.4 million in rent deposits last year, although this figure has been decreasing since 2017, when €2.1 million was paid to cover almost 3,000 individual rent deposits.

Aside from housing-related costs, the ENPs also cover rent and mortgage payments for people who cannot meet them, amounting to €1.9 million last year, and other items such as burial and funeral costs, which amounted to €5.7 million.

Since 2016, the department has approved funds totalling almost €2.2 million to pay for cots, buggies and other child-related items, and almost €1.2 million to assist with household bills.

Mike Allen, director of advocacy with Focus Ireland, said the willingness to pay ENPs was positive as they had been more difficult to access during the recession.

However, he said he was concerned by the increases recorded in recent years as they were driven by greater difficulties people were facing in meeting costs.

“You have a snapshot of the lives of people who have to resort to their community welfare officer for these things,” he said. “It’s great the system is there but the fact people have to rely on them is an indication of how tough things are getting at the bottom end of society.”

He said higher rents caused by the housing crisis in many instances meant people were dipping into money usually used for utility bills and other expenses, and then applying to the state for assistance. “We force people into this demeaning, means-tested exceptional system where they have to go and ask for these payments.”

Elsewhere, figures for last year show that more than 50 per cent of appealed claims originally denied by the department were either overturned or revised in favour of the recipient following appeal.

In any year, about 15 per cent of claims are not awarded, and 1 per cent of those decisions are appealed. Of the 22,572 appeals finalised last year, some 7,543 – more than one-third – were allowed by appeals officers and a further 4,669 – or 20.7 per cent – were revised in favour of the appellant, figures provided by the department show.

1 Coronavirus: More ‘striking’ evidence BCG vaccine might protect against Covid-19
2 Meet the Irish woman leading New Zealand’s Covid-19 response
3 This time, the future of the euro really is at stake
4 Coronavirus: Doctors fear Covid-19 yet to peak in the State as ICUs near full capacity
5 Coronavirus Q&A: What new powers have the gardaí been given?
Real news has value SUBSCRIBE