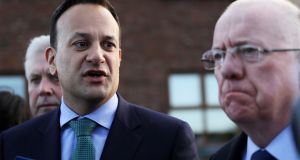 “What we’re hearing from people on the ground and at the doors is that there are some anomalies that need to be fixed,” Mr Varadkar said. Photograph: Brian Lawless/PA Wire

The leaders of Fianna Fail and Fine Gael have made promises to deal with the pension gap for those who are contractually obliged to retire before the age of 67 amid public backlash over the issue.

Taoiseach Leo Varadkar has said he will create an “early retirement pension”.

“What we’re hearing from people on the ground and at the doors is that there are some anomalies that need to be fixed. And one of those anomalies, in my view, is people who are required to retire before the age of 66, or even before the age of 67, and what we propose to do there is to bring in a transition pension or an early retirement pension like existed in the past for those who are contractually required to retire earlier,” Mr Varadkar told reporters on Sunday.

“For those who aren’t contractually required to retire before 67 we think that policy should continue, it was supported by all parties, and it makes sense on a sustainability basis. If we don’t act now it will create a big problem in the future.

“Look what’s happening in France for example where they’re going from 62 to 67 in five years and that’s because they didn’t act early enough so a stitch in time saves nine, and I think certainly for people in their 30s, 40s, 50s and early 60s actually making this change is to their advantage.”

Fianna Fáil leader Micheál Martin said he would look to outlaw contracts that force people to retire at 65. He said if state pension qualifying age rises to 67 “having people for two years in a limbo situation where they can’t get funding after the first nine months is not sustainable or acceptable.We would review going to the 67 on the grounds it needs to be a level playing pitch all round for pensioners. ”

Mr Martin said the idea of compulsory retirement at 65 has to change.” I would look at graduated retirements. We are losing a lot of experience and expertise which to me dioes not make sense in the context of a society that is living longer.”

Sinn Féin has pledged to keep the State pension age at 65.

He was speaking in light of a poll which showed his party 12 points behind Fianna Fáil.

“I think the opinion poll demonstrates that there is a real risk, a real danger, that we will have a Fianna Fáil government after the next election. And I would really hate to see that happen because it would mean the country falling backwards.

“And we know what happens every time Fianna Fáil gets into power it ends badly. It ends with a boom and bust, it ends with unemployment and ends with us having to wave our friends off at airports when they’re forced to emigrate, and I don’t think anybody wants that.

“It would also mean that the Brexit team of the Simon Coveney and Helen McEntee would no longer be representing Ireland in what are going to be crucial talks over the next couple of months when it comes to securing a trade deal with the UK, and that will be really bad news I think for rural Ireland, for the agri food sector, for jobs and the economy,” he said.

Earlier on Sunday Labour Party health spokesman Alan Kelly said the increase in the qualification age for the state pension to 67 from next year is one of the main issues arising on the doorstep.

The topic is “really, really out there and is coming up on the doorsteps in all the constituences”, he said.

“If we are going to go into any government, we are not going to allow this to happen. It is non-negotiable.”

The change in the age for entitlement for the state pension was legislated for in 2011, when the Labour Party was in government with Fine Gael.

However the party leader, Brendan Howlin, said the measure had already been agreed as part of the bailout deal with with the European Commisison, the European Central Bank, and the International Monetary Fund (the troika).

“The pension age increase was agreed by the Fianna Fáil-Green government with the troika, and passed into law subsequently,” he told The Irish Times .

“The increase to 67 has not happened yet, and can be stopped now as the country is in a different place with more people at work and the Social Insurance Fund is in substantial surplus.”

He said the economy and demographic situation were in much better condition now than had been projected back in 2011.

“It is simply unacceptable that people would be expected to sign for unemployment when they should be retired and Labour is committed to stop that happening,” Mr Howlin said.

Mr Kelly said that the top issue on the doorsteps was health, and in particular getting access to acute services in the health system.

In a briefing with the media on Sunday morning, he said the second major issue that was featuring in the election campaign was crime and he criticised the government for its “lack of actual detailed plans to deal with escalating crime, particularly in certain areas of this country,” citing north Dublin and Drogheda.

The third of the three major issues he mentioned was the change in the pension age. Changes to the state pension were contained in the Social Welfare and Pensions Act 2011, which was signed into law on June 29th, 2011.

The law provided for a standard state pension age of 66 years for everyone from January 1st, 2014.

In addition, the Social Welfare and Pensions Act, 2011 provided for an increase in the age for qualification for the State pension to 67 years from 2021, and a further increase to 68 years from 2028.