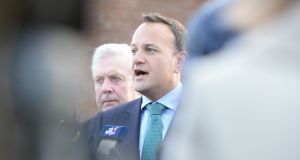 Those were the words of Taoiseach Leo Varadkar at the end of the first week of the general election campaign, a week overshadowed by serious crime.

Keane Mulready Woods (17) was abducted in Drogheda, Co Louth, last Sunday week as part of a gangland feud in the town. He was murdered and his body dismembered with most of his remains found in two batches in north Dublin.

One of the criminals involved in the Drogheda feud was shot at on Monday night as he travelled in a taxi. He escaped uninjured but the taxi driver was wounded.

Cameron Blair, a 20-year-old student, was fatally stabbed in the neck on Thursday at the property where he lived in Cork in a row over who was being allowed into a house party.

Two men were wounded on Friday as they sat in a car on an industrial estate in St Margaret’s in Dublin in a gangland attack. In the early hours of Saturday, two men were shot in Sixmilebridge in Co Clare.

Despite the violent events of the past week, the Taoiseach is right when he says the homicide rate last year was about half what it was a decade ago. Ireland’s homicide rate is the 23rd lowest in the world, according to the UN’s Global Study on Homicide report last year.

The small number of organised crime gangs who become embroiled in murderous feuds in recent times is a cause for concern. These disputes have endured for a decade or more in the past.

Gun killings peaked in the State at 26 cases in 2006 but last year that fell to 11, 10 of which were gangland killings.

Garda Commissioner Drew Harris recently attempted to debunk a view that crime rises during a recession. He said that when people have more money to spend on drink and drugs, crime rates increase.

There can be no doubt that prosperity has been the biggest driver of crime in the State since 2003, when the Central Statistics Office began publishing crime data. Crime increased from 2003 until about 2009 and then fell (in line with the economy). About three years ago, when the economic recovery began to take hold, crime started to increase again.

Crime rates, generally speaking, are still a long way off their peaks of just over a decade ago. But a pattern of sustained increases in Irish crime is now well underway.

The number of sex crimes being reported to the Garda is now at an all-time high. Crimes linked to prosperity are increasing such as assaults, drunkenness and disorder as well as drug crime and the gun crime associated with it.

Because the drugs trade has been recovering – with demand rising in line with disposable incomes – gangs are competing more intensely for their share of the market.

That competition has resulted in renewed gang feuding. Last year, for example, saw the first two murders in the Drogheda feud. Similarly, a feud in Coolock began at the start of last year and has so far claimed five lives.

When one considers drug crime increased by 17 per cent in the 12 months to last September, after falling for years, it is not hard to understand why drug gang feuding has suddenly started to take hold again.

The gun murder rate may not be as high as the peak of 2006, but the running feuds have the potential to significantly worsen in the year ahead. At the same time, the Garda has been better resourced than ever in recent years to tackle the gangs.