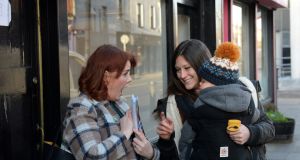 Cllr Neasa Hourigan of the Green Party with Kelly McCarthy and her son Ruadhán, while canvassing in Stoneybatter at the weekend. Photograph: Dara Mac Dónaill

“We need someone like Tony Gregory – he’s one of the only people who did really well here,” explains Joan Murphy (59) from Manor Street as she is canvassed in Dublin 7 at the weekend.

Gregory, who was an Independent TD in Dublin Central for 27 years before his death in 2009, campaigned for better housing, in support of female street traders and against the drugs problem that plagued the inner city in the 1980s.

“He felt like your next-door neighbour – he wasn’t this politician far removed from society,” Murphy adds as she addresses Green Party candidate councillor Neasa Hourigan, who nods in agreement.

“It’s amazing,” she replies. “He’s still mentioned on the doors to this day.”

Hourigan is hoping to become the first ever Green Party TD in the northside constituency, which stretches from the inner city out to Cabra, Phibsborough and Glasnevin.

The fact that Independent TD Maureen O’Sullivan, a former member of Gregory’s team who won the seat in the byelection that followed his death, is retiring, and Dublin Central now has a fourth seat, opens the door to candidates such as Hourigan and her rivals Gary Gannon (Social Democrats), Mary Fitzpatrick (Fianna Fáil) and Joe Costello (Labour).

Sinn Féin leader Mary Lou McDonald and Minister for Finance Paschal Donohoe are widely expected to hold their seats in the constituency, meaning there are two relatively clear openings.

“At this stage, with three weeks to the election, anything could happen and I certainly think that we have a good chance to take a seat here,” Hourigan says.

As she walks around Stoneybatter, Hourigan, a full-time carer for one of her children and an architect by profession, proves popular with young people, families and cyclists.

“When I was out canvassing for the Green candidate Ian Smyth in the 2016 [general election] never once was I asked about climate stuff,” she says.

“It’s only in the last 12 months with Trump moving to exit the Paris climate agreement and the fires in Australia – it’s real in a way now for people when it maybe wasn’t before.”

While housing and health are two issues constantly being brought up by voters, some have more localised concerns.

Vera McCormack (69), from Stoneybatter, tells the councillor that Arbour Hill needs to be cleaned up.

“I’m probably voting Fianna Fáil and I’ll give Fine Gael a vote because I like them at the minute.

“ I am Fianna Fáil originally. This is real Bertie territory, or at least it was.”

“Nowadays you can’t even walk down O’Connell Street,” she says.

Hourigan says crime is “always part of the discussion in Dublin Central”.

Green Party MEP Ciarán Cuffe, who ran unsuccessfully in Dublin Central in 1997 before being elected as a TD for Dún Laoghaire in 2002 and 2007, has been assisting candidates such as Hourigan on the campaign trail.

“I think there is an opportunity in Dublin Central,” he says. “I think Minister Paschal Donohoe has a safe seat, I think Mary Lou McDonald has a seat here and perhaps Mary Fitzpatrick. Then I think it’s all to play for between Joe Costello, Gary Gannon and Neasa.

“Dublin Central is generally not known for surprises but it could result in one this time round.”