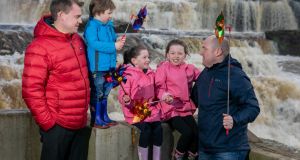 More than 6,000 kilowatt hours of electricity were consumed during the general election count for the Clare constituency at the Falls Hotel in Ennistymon in 2016. This is enough to fuel the average electric car for a full 40,000km circumnavigation of the globe.

When the ballot boxes are opened in the Ennistymon count centre next month, the hotel will be supplying energy to the electricity grid rather than drawing from it.

Work on the hotel’s hydroelectric plant was completed last year. By generating electricity from the nearby river Inagh, the hotel estimates it has already prevented some 550 tones of carbon from being released into the environment.

Michael McCarthy, general manager of the hotel, said the move towards renewable energy was driven by demand from customers, locals and staff.

“People are looking for green places to come and stay,” Mr McCarthy said.

“These days everyone wants to do their bit for the environment. If you could choose between two hotels, one that was green and one that wasn’t, you’d pick the green hotel all day long.”

Plans are also in place to develop a pumping system that would see all of the hotel’s hot water generated from renewable sources.

Ennistymon is the base of Cllr Roisín Garvey, the Green Party’s candidate in the Clare constituency, but Mr McCarthy would not reveal who he intends to support in the election.

However, he believes that green issues have become much more important to the community in Co Clare.

“Everyone needs to do their bit. Awareness of the environment and the different issues that need to be addressed has grown massively in this area in recent years,” he said. “I think that education is the key. The more people know, the better able they will be to change.”

During the development of the hotel’s hydroelectric plant, care was taken to ensure that wildlife in the river, including spawning fish, was not impacted.

1 At least eight shot dead in German town of Hanau
2 A Russian cruiser with ‘cannibal rats’: What other ‘ghost ships’ could be out there?
3 Person claiming to represent ‘ghost ship’ owner comes forward
4 DUP pleads with UK to reduce salary threshold for migrant workers coming to North
5 ‘If all the immigrants go back, who will work in the meat factories and do the crap jobs?’
Real news has value SUBSCRIBE