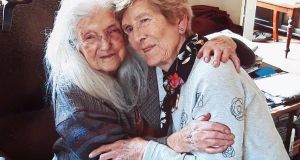 Eileen Mackin (81) with her birth mother Elizabeth (103): ‘She was thrilled and she never let go of my hands and she put her arms around me’

An 81-year-old woman met her 103-year-old mother at her home in Scotland last month after a search that had gone on more than 60 years.

Eileen Mackin was raised in a Dublin orphanage in the 1930s and 40s, and her story first came to public attention last year when she contacted RTÉ’s Liveline and told host Joe Duffy about her difficulties tracing the woman who had given birth to her in 1937.

Given her age and the probable age of her mother, the likelihood of a reunion was remote, but Mackin never gave up hope. After she featured on the radio, a genealogist offered to help her to realise her seemingly impossible dream.

They pieced together enough of the genealogical puzzle to locate the woman Mackin had been looking for. Perhaps even more remarkably, she was still alive. Her name is Elizabeth and she celebrates her 104th birthday this coming Saturday.

She received an early and unexpected birthday present on April 11th when her first-born daughter visited her at the home she shares with one of her two sons.

“I just went over with my daughter and my husband and her husband and I knocked on the door and a gentleman opened it, and I told him I was from Ireland and that I had found my mum and could I come to see her, and he said ‘certainly’,” Mackin said.

The woman she had sought for so long was sitting in the livingroom, and Mackin approached and explained she had come from Ireland to see her.

“She said: ‘I was born in Ireland,’ and she was thrilled and she never let go of my hands and she put her arms around me.”

I can’t believe this surprise I got at this stage in my life, you can’t understand how thrilled I am

Mackin said that when she asked if she knew that she was her daughter, Elizabeth “just looked up at me and took my hand and we had a great chat. There was such a bond between the two of us, it was fantastic.”

The meeting was almost exactly how Mackin dreamed it would be.

“I said to my children all my life that I loved this lady but I didn’t know who she was. And that is exactly what I got when I went to the door,” she said. “If you saw her little face, such a happy little lady, she is just fantastic. I can’t believe this surprise I got at this stage in my life, you can’t understand how thrilled I am.”

Mackin said it was hard to say goodbye to the woman she had spent so long looking for.

“She wouldn’t let me go but I was afraid to stay too long with her because she is elderly and I have to respect that. But her son was so lovely and my mum said to me: ‘Oh I wish I could get up and make some tea for you but I don’t think I’ll be able.”

Mackin and her family spent three days in Scotland before returning to Ireland.

“I am going around singing, I’m that happy,” she said. “You have no idea what is has done to me. I’m just so happy and I’m so grateful.”