Department of Finance fears on free education not justified 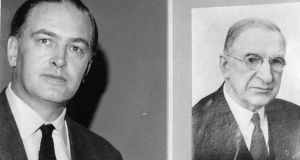 Donogh O’Malley’s announcement of his intention to introduce free secondary education sparked the ire of the Department of Finance. Photograph: Eddie Kelly

Not all doom-laden Department of Finance warnings over ambitious public spending plans necessarily come to pass.

While the department tasked with keeping guard of the State’s finances has forcefully objected to the cost of the National Broadband Plan, it famously issued stark warnings over a proposal to introduce free secondary education back in the mid-1960s.

Then Fianna Fáil minister for education Donogh O’Malley announced his intention to introduce free secondary education on September 10th, 1966, in the following school year without the knowledge or sanction of the Department of Finance.

While now seen as a milestone in Irish history, the department’s then secretary, TK Whitaker, was incensed.

In a scalding memo to the then taoiseach Seán Lemass shortly after the announcement, he raged against the proposal.

It had “not been approved by the government, has certainly not been examined from the financial [whatever about the educational] aspect and, therefore, should have received no advance publicity, particularly of the specific and definite type involved in Mr O’Malley’s statement”.

A few weeks later, in a Cabinet submission, the same department urged that the proposal be deferred given that the proposed cost – up to £3 million a year – would add substantially to public expenditure.

“All available forms of taxation have been exploited to the maximum extent considered tolerable. If the proposals are to be approved, there will be no alternative to the imposition of new taxation,” it warned.

“The proper course would be to defer these proposals, however desirable they may be in themselves, until funds sufficient to pay for them become available at present taxation levels.”

Emeritus professor of education at University College Cork (UCC) Áine Hyland, however, said it was likely Lemass knew in advance that O’Malley was planning to make the announcement.

She said Whitaker subsequently said in an interview that when he met Lemass to discuss the matter, he deduced from the smile on the taoiseach’s face that he had personally authorised O’Malley to make the announcement.

As for whether the investment was justified, it is now widely accepted that free education helped pave the way for a transformation in not just the education system but the economy and society as a whole.

At the time, one-third of all children were dropping out of school after finishing primary level and fewer than 50 per cent were still in full-time education by the age of 15.

Within a decade of the policy change, participation rates in second-level doubled.

While the free education announcement was criticised by the department on the basis that it was not subjected to a detailed financial examination, this was not strictly true.

A key precursor to the announcement was an influential OECD report, Investment in Education (1965), the first detailed analysis of the Irish education system. It highlighted marked inequalities based on social class and geographical location.

Prof Hyland, a member of the team involved in putting the report together, recalled that the report laid the foundation for O’Malley’s subsequent announcement.

In particular, a detailed school location analysis – contained in the appendix – was of huge value.

It ended up providing a template and a development plan for a nationwide system of post-primary education that would be accessible to all.

“The statistics and the analysis carried out by the Investment in Education team provided crucial evidence on the need for expanding post-primary provision,” said Prof Hyland.

She feels that, ultimately, the timing of O’Malley’s appointment as minister for education in July 1966 could not have come at a better moment.

“O’Malley proved himself willing and able to ride roughshod over the innate caution of some of the senior civil servants and to overrule their advice,” she said.