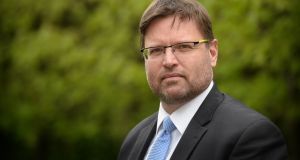 Ophir Kariv, the Israeli ambassador, described the Occupied Territories Bill as ‘the most extreme, anti-Israel piece of legislation in the western world’. Photograph: Dara Mac Dónaill

Campaigners calling for a boycott of the Eurovision song contest in Tel Aviv next week have rejected claims by the Israeli ambassador that they are extremist or pushing an anti-Israel agenda.

Israel’s envoy to Ireland, Ophir Kariv, dismissed supporters of the boycott as an “extremist” minority who had a track record of hijacking cultural events to promote their agenda.

The ambassador made his comments in an interview with The Irish Times published on Thursday.

The campaign, launched last year after Israeli singer Netta won the contest in Portugal, is backed by Irish musicians, politicians and media personalities.

Campaigners have appealed to Co Clare singer Sarah McTernan, who will represent Ireland in Tel Aviv next week, not to participate and a petition supporting the boycott was signed by thousands of supporters.

“The Israeli government and their agents always try to discredit people who oppose them and raise legitimate democratic concerns about the treatment of the Palestinians which is an outrageous violation of human rights law,” said Independent Senator David Norris, who supports the boycott of the event.

“I don’t regard myself as an extremist,” he added.

“Now it is an extreme right-wing state which completely ignores and tramples upon the human rights of its minorities who are Palestinian,” he said.

Sinn Féin Senator Fintan Warfield, who has joined calls for the boycott of the Eurovision, said he believed there was strong support among the public for Ireland to skip the event this year.

“The people’s representatives in the Dáil have recognised the state of Palestinian almost five years ago and the Seanad has progressed a Bill to ban the import and sale of goods and services from illegal settlements. I think there is support for Palestine in Ireland and I think it includes this event,” he said.

Mr Kariv described the Occupied Territories Bill, which aims to ban products from Israeli settlements considered illegal under international law, as “the most extreme, anti-Israel piece of legislation in the western world”. The Government is opposed to the legislation on the basis that it contravenes EU trade law.

Independent Senator Frances Black said the Bill, which she proposed, was not anti-Israeli. She pointed out that it was supported by a group of eminent Israeli figures when it passed its first Dáil vote.

She said the legislation was recognition that “a lasting, peaceful solution must be based on respect for international law”.

Mr Kariv warned that if the Bill, which is at committee stage in the Oireachtas, was enacted, it would have implications for relations between the Irish and Israeli people.