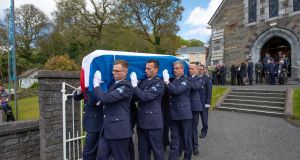 Members of the Royal Netherlands Air Force gathered in a quiet country graveyard in West Cork on Thursday to honour one of the last of their famous May Fliers who defended their country against the Nazis.

They came from the Netherlands to scenic Glengarriff on the ruggedly beautiful Beara Peninsula to pay a final tribute to Major Jan Linzel. The former pilot died on Sunday at the age of 103, almost 80 years after he took to the air to fight the Luftwaffe in the skies over Holland in May 1940.

Major Linzel’s wife of over 60 years, Marianne and his son, Otto and his wife, Josie and their daughters, Emma and Mary Ellen listened in the local Sacred Heart Church as the Commander of the Royal Netherlands Air Force, Lt General Dennis Luyt recalled Major Linzel’s heroism.

Lt General Luyt recalled how the late Major Linzel used to say one always needed some luck in life and while he had indeed enjoyed luck on many occasions, he had also displayed great courage, including on that day in May 1940 when Germany attacked the Netherlands.

He recalled how Major Linzel, aged just 24, was attached to a fighter squadron at Ypenburg when Germany declared war on the Netherlands on May 10th, 1940 and how he took off in his Fokker DXX1 single seat fighter to attack the Luftwaffe.

He said Major Linzel shot down a much faster German Messerschmitt 110 in a dogfight before he himself was shot down. Undeterred, he joined the Dutch Resistance before making his way to Britain in 1943 where he joined the RAF with whom he flew almost 100 sorties.

“People like Jan Linzel are the people who make a difference for our countries and today we pay tribute to his life and his legacy,” said Lt General Luyt who recalled how Major Linzel returned after the war to the Netherlands where he helped rebuild the Dutch airforce.

Major Linzel’s granddaughter, Emma recalled how when she was born, her grandfather said his dearest wish was that he would live long enough for her to remember him and she was so glad that he was granted his wish and she had many years with which to form so many fond memories.

“I was so proud to call you my Opa (grandfather) – a man whose stories will not only stay with me but will go down in history – spending our holidays with him in Friesland made for the happiest memories for myself and my sister, Mary Ellen,” she recalled.

Thanking all those who had come to pay tribute to his father including Methodist minister Rev Greg Alexander and Catholic priest, Fr Michael Moynihan, Otto Linzel recalled how his father had come to love Glengarriff from visits before the family moved there in 1978.

He used to enjoy meeting friends, engaging in conversations and sipping whiskey and he learned a few Irish phrases including one toast, “Sláinte and Saol Fada Agat - Here’s to Health and a Long Life”, which he used up until his last days, said Mr Linzel.

Later in the graveyard, coronet player Sgt Major Pieter Bergsma played the Last Post and Lt General Luyt presented the Dutch flag from Major Linzel’s coffin to Marianne before the Dutch airforce gave their final salute and Major Linzel was laid to rest in the rocky hillside cemetery.

Among those to attend the funeral service were the Dutch Ambassador to Ireland, Adriaan Palm, the Chief of Staff of the Defence Forces, Vice Admiral Mark Mellett and Chair of the Cork Branch of the Royal British Legion, Gerry Donovan.